Navajo Pass peaks with Summit success for McCain at Doncaster

Bought as a potential juvenile hurdler by McCain’s biggest supporter, Tim Leslie, he showed plenty of ability on the Flat in the summer but was always going to excel when faced with a jumping test.

He won first time out at Bangor by 20 lengths, but was nailed late on at Newcastle last time out having looked home and hosed.

Stepped up to Grade Two company, Navajo Pass was sent off a 100-30 chance with Nicky Henderson’s French import Tombee Du Ciel all the rage.

However, James Reveley was soon sending out distress signals on the filly and she dropped away tamely, with Alan King’s Lord Lamington the only real danger over the final three flights.

Despite travelling seemingly the better, Lord Lamington could never quite get on terms and the more Brian Hughes asked of his mount, the more Navajo Pass delivered and he won by three and three-quarter lengths.

“He’s been having to do everything on his own in his two runs over hurdles to date as he’s relentless, so we wanted to see what we had by coming here today,” said McCain.

“The last day he just got mugged on the line. Brian tried to mind him as he was five lengths clear going to the last.

“From the top of the straight we pressed on and his stamina seems bottomless.

“The only proper race he’s run in was on the Flat at York and that was too much for him. He’s done today what we thought he was capable of.

“He’ll have a little break now because he’s picked up a cut, which hopefully isn’t serious, and then he’ll have one run before Cheltenham.

“Whether that is for the Triumph or the Fred Winter, we’ll let the handicapper tell us that.

“It means a lot to have another nice horse for Tim. He stuck by us when he didn’t have to and it’s been a testing time.”

Hughes made it a double on the day when Nicky Richards’ mare My Old Gold (4-1) pipped odds-on favourite Cloth Cap on the line in the bet365 Handicap Chase. 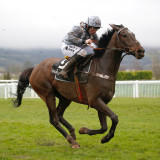