Next Destination maintained his unbeaten record over fences with a tenacious success in the McCoy Contractors Civils And Infrastructure Hampton Novices’ Chase at Warwick.

Having made a winning chase debut in a Grade Two at Newbury in November, the Paul Nicholls-trained nine-year-old added to that with victory at the same level in the three-mile contest.

Despite being the first off the bridle midway down the back straight, the 10-11 favourite responded well for pressure under Harry Cobden to take a slender advantage turning for home.

As Golan Fortune dropped away on the run to the last, it was left to Fiddlerontheroof to thrown down a challenge, but the Colin Tizzard-trained runner old could not quite get on terms, with a length and a half separating the pair at the line.

Cobden said: “He is a little bit more relaxed now and when he has been asked he has jumped pretty well. He has jumped well on the whole.

“He is a bit older and is getting slightly lazier. I don’t mind pushing them for a bit if they keep finding and to be honest he plugged on really well. He swung into the straight and was the one to be shot at. He was long over two out and winged the last and stayed galloping.

“I think in a race where there are more runners you could run him third or fourth and it would be nice to have one to aim at with him. He looks like he stays very well and he has won here and at Newbury so the trip is not an issue.

“I’d say both were good races and he has come out and performed both times, so you have got to be pleased with him.”

Although Next Destination was made a 14-1 chance for what was known as the RSA at the Cheltenham Festival by William Hill and 12-1 for the same race by Coral, Cobden believes the Mildmay Novices’ Chase at Aintree could be a more suitable option.

Next Destination 8/1 with some firms for what was the RSA Chase (3m) plus the National Hunt Chase (3m6f) at the Cheltenham Festival after his @WarwickRaces win. Which race do you think is he best fit for him?

He added: “I don’t known if he is an RSA horse. The three-mile race at Aintree might suit him. Paul might get him home tonight and think RSA it is, or say ‘right, we will take our time and go for Aintree’.

“One thing I do know is the be all and end all is not Cheltenham in Paul’s mind, so Aintree is on the cards.”

Earlier, Sky Pirate opened the door to bigger and better targets after continuing his progression over fences with victory in the Edward Courage Cup.

The Jonjo O’Neill-trained eight-year-old defied an 11lb hike in the weights following victory at Cheltenham to make it two wins from as many starts since being dropped back to two miles.

Moving past long-time leader Generous Day approaching the second-last, the 13-8 favourite pulled out plenty to defeat Amoola Gold by two and a quarter lengths in the hands of Jonjo O’Neill junior.

The winning rider said: “He is a bit of an enigma, as he has never shown at home that he wants two miles.

“I think people have been getting him slightly wrong as I’m just not sure he gets the two and a half we were aiming him at, but I think he stays two miles strongly.”

Following the race Sky Pirate was cut from 7-1 into 6-1 favourite for the Grand Annual at the Cheltenham Festival by Paddy Power – a race which O’Neill junior believes could be a suitable aim.

He added: “He would (be a horse for a Grand Annual). He has won off 145 and won quite nicely. He is still a novice so we would have to have a look, but he will be entered up in everything I’d imagine.”

Will Sting (7-2) made the most of a drop back to two miles when giving weight all round to claim the Pertemps Network Novices’ Handicap Hurdle by nine and a half lengths.

Jockey Aidan Coleman said of the Lucy Wadham-trained winner: “The drop back in trip helped him. They went quite quick on that ground and they probably stopped a bit in front.

“He’S a nice-moving horse. I’d not sat on him before, but that ground didn’t seem an issue even though it was different to what he won on around Huntingdon.” 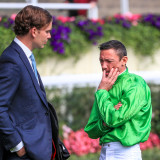 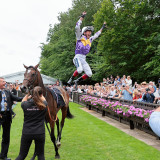 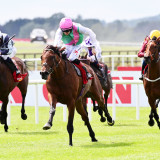