Watch a full replay of the Timico Cheltenham Gold Cup won by Native River at Cheltenham on Friday and video interviews with connections.

Native River saw off Might Bite to make all the running in what was an epic duel for the Timico Cheltenham Gold Cup.

Third 12 months ago, the Colin Tizzard-trained Native River (5-1) went two places better to win in the hands of champion jockey Richard Johnson, who was landing the blue riband for the second time after Looks Like Trouble in 2000.

Native River and Might Bite, the 4-1 favourite, were the first two throughout and it was the former who proved stronger from the last fence to prevail by four and a half lengths. The pair were a further four lengths clear of 33-1 chance Anibale Fly in third.

Johnson said: "I'm speechless. He's been a fantastic horse for me and I was lucky to pick up the ride on him.

"He's just amazing. He jumps for fun. I was getting squeezed, but at the second-last and the last he just wanted it so much.

"I knew Nico (de Boinville, on Might Bite) was there and to be fair to Might Bite, he's run a hell of race, but I think we just outstayed him. They are two very brave horses."

He added: "Eighteen years (since Looks Like Trouble) seems a long time!"

"Might Bite came to him and I thought that was it, but he just powered away again.

"We've had a wonderful preparation with him, so you think something's going to go wrong in the race, but it didn't. His form has gone on from last year.

Johnson had made his intentions clear from the start of the extended three-and-a-quarter-mile test by setting off in front, but he was shadowed all the way by De Boinville and Might Bite. They dominated proceedings all the way through and no other horse was able to get to them.

Might Bite, bidding to give Nicky Henderson an unprecedented treble after the victories of Buveur D'Air in the Champion Hurdle and Altior in the Queen Mother Champion Chase, appeared to be going the better of the two as they turned for home.

However, the King George VI Chase winner was just found wanting from the last, as the stamina of last season's Hennessy and Welsh National scorer kicked in.

Johnson was later suspended for seven days and fined £6,550 for using his whip above the permitted level from approaching the second last fence.

Tizzard's son and assistant, Joe, said: "Dicky (Johnson) gave him a fantastic ride. It looked like Might Bite was going to maybe outclass him, but he's a tough, honest horse - he's unbelievable.

"All credit to Dicky, he set the fractions."

Tony Martin was thrilled with the performance of Anibale Fly. He said: "We're all delighted with him. He ran a lovely race at Christmas and we thought he was definitely a horse with a chance for the Irish Gold Cup and here. Unfortunately he was a bit disappointing last time, but he's bounced back and run a blinder and any day you're third in the Gold Cup is a good run.

"I'd say he's come across two good ones today, but he's run a blinder.

"He's my only runner in Cheltenham this year. We're just low on horses and we've been very quiet for the last few years, but hopefully we'll come back stronger.

"We'll get him home and see how he is in two weeks. We'll see if there's anything for him then in a month to six weeks."

Road To Respect was fourth for Noel Meade, who said: "He's run well, he probably didn't jump as slick as he usually does, but that might have been down to the ground. He missed the third-last and that could have knocked the stuffing out of him.

"He's only seven and better ground would help. It's too early to say definitely Punchestown, but if he's well he might."

The Willie Mullins-trained Djakadam has finished second in two Gold Cups and was fourth in last year's renewal.

He was run out of the places this time, finishing fifth under the trainer's son, Patrick.

Mullins junior said: "He gave me a great spin, it's just unfortunate he's not getting any younger.

"He jumped and travelled. If you could ride him every year it'd be great."

Bachasson unseated Danny Mullins at the second fence, while Our Duke and Saphir De Rheu were pulled up and Total Recall came down three out. 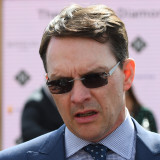 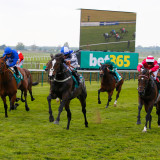