William Haggas will consider an immediate step up to Group One level with My Astra after a “startling victory” in the Tennent’s Lager British Stallion Studs EBF Rothesay Stakes at Ayr.

A dual winner last summer and placed twice in Listed company since, the four-year-old half-sister to the high-class My Oberon was the 13-8 favourite to open her Stakes race account in Scotland.

After moving smoothly into contention, the daughter of Lope De Vega engaged overdrive once popped the question by Tom Marquand – sprinting 12 lengths clear without being fully extended.

Haggas, saddling his 17th winner in the last fortnight, said: “She won really nicely, enjoyed the step up in trip and possibly the ease in the ground too.

“I thought it looked a better race than last year, but she did really well. I was really impressed with her today. She travelled well and when he (Marquand) said ‘go’, she went. It was a startling victory.”

My Astra holds a top-level entry in the Pretty Polly Stakes at the Curragh on June 26 and Haggas admits he will now have to give a trip to Ireland serious thought.

“My original plan was to miss Royal Ascot and go to the Hoppings Stakes at Newcastle, but it just looked there like the all-weather at Kempton (when third) last time was not for her,” the Newmarket handler added.

“She’ll go either to the Hoppings or the Pretty Polly and we’ll decide which nearer the time.”

Meanwhile, Lilac Road has the Nassau Stakes at Goodwood as an aim later in the season having gained a first Group race win in the Middleton at York last week.

The Haggas-trained four-year-old turned around previous form with Sir Michael Stoute’s Ville De Grace and relished the step up to an extended 10 furlongs.

While Haggas is keen to try her over a mile and a half at some point, with both the Lancashire and Yorkshire Oaks possible targets, it is the Nassau that is firmly on the agenda in July.

“It was a real pleasure. It’s always a risk running them back quickly and on the face of it it didn’t look like she could beat Ville De Grace as she had beaten her twice,” said Haggas.

“But she improved to win, she got a lovely ride, a good split and did it really well – she loved the trip.

“Tom (Marquand) did say after Newmarket that he thought she would get a mile and a half well this year, so she could go out in trip.

“We kept her in training to win a Group race and she’s won a Group Two, so we’ve nothing to lose now so we’ll give it a roll.

“The Yorkshire Oaks is a possibility, we’ll try the Lancashire one first I would suspect, so I would think we’ll go there and miss Ascot.

“I want to have a shot at the Nassau. It may be too much but the Aisbitts (owners Jon and Julia) are from that part of the world and it’s Mrs Aisbitt’s birthday on that day, so we’ll go for that with a couple of races between now and then.” 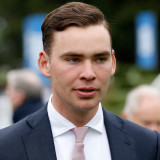