Charlie Hills could have a potential Group race performer on his hands in Mutasaabeq, who maintained his unbeaten record with an impressive display in the bet365 British EBF Conditions Stakes.

After making a winning debut over seven furlongs on heavy ground in October the son of Invincible Spirit, out of 2009 1000 Guineas heroine Ghanaati, appeared to appreciate the switch to a sounder surface in this latest course and distance success.

Prominently ridden throughout, the 7-2 chance gradually wound matters up from the sharp end before crossing the line six lengths clear of Noble Dynasty to give jockey Jim Crowley his first winner in Britain this year.

The unbeaten youngster is now a best-priced 10-1 for the Qipco 2000 Guineas, but will need to be supplemented.

Hills said: “The way the track is and with the wind behind them it is a bit of an advantage being in front. He has won on heavy ground but he loved the ground today.

“We are always learning but I think he is a very talented horse. We didn’t put him in the 2000 Guineas and we spoke about it at length as we were a little bit concerned temperament-wise so we wanted to go down the soft route.

“We can have a discussion now about putting him in a race like that (Qipco 2000 Guineas), but we are mindful it is a long season and there are plenty of good races we can aim for. He was a bit funny in the stalls but we can work on that and he has got a bright future, for sure.”

The George Boughey-trained Cotai Glory colt made up for his late withdrawal on vet’s advice from the Brocklesbury Stakes at Doncaster on the opening day of the season with a smart performance in front of Joorabchian, who operates under Amo Racing Limited.

Racing just in behind the early pace under jockey Rossa Ryan, the 4-1 chance waited until the gaps appeared late on before powering clear in the closing stages of the five furlong dash to defeat early leader Love De Vega by three quarters of a length.

Joorabchian said: “We were ready for the Brocklesbury but events took their place and he couldn’t run there. But that may have favoured us as it gave us that bit more time for him to settle down and he looked great today.

“He has got a lot of speed behind him. He is bred for speed being by Cotai Glory. He is bred really well. Hopefully he will be a good horse and lead us into more fun things to come.”

Asked about a potential Royal Ascot appearance, he added: “Fingers crossed. It is still a little bit of way to go to Ascot but that is the aim and we are always trying to get there.”

Winning trainer Boughey believes that Forca Brasil could be the type to take up an entry in the Group Two Norfolk Stakes, should he make it to the Royal meeting.

He added: “He wasn’t rapid from the gate but Rossa (Ryan, jockey) said after a furlong he was just in his hands and he travels very well. He is showing a lot of speed at home and Rossa has said at the moment five furlongs is his trip.

“He has worked a few times here and it has been good. He looks a Norfolk horse probably, but he has done it nicely today.”

Franny Norton was praised for giving a jockey’s “masterclass” to help Overwrite get his career back on track with a tenacious success in the Pat Smullen Memorial Handicap.

The Mark Johnston-trained four year old ended a spell in the doldrums when going one better than at Newcastle six days ago in the mile contest named in honour of the Classic-winning rider, who died following a lengthy battle with cancer in September.

Despite being joined up front late on by eventual runner-up Oh This Is Us, the 16-5 chance found more to prevail by a head and secure his first victory in more than nine months.

Charlie Johnston, son and assistant trainer, said: “That was top class from the jockey and it was a masterclass on how to ride this track. I think I knew from about 200 yards in that he was going to win.

“I was always confident Franny felt he had Scottish Summit covered - it was just the danger that Oh This Is Us came quite wide and late. I think if he would have come closer he would have kept finding more.

“It was a good performance. He is probably the type to try to get high enough up in the weights to sneak into the Royal Hunt Cup.”

On Smullen he added: “It is a very nice race to win for sure. He is not someone I knew particularly well but he was obviously a very inspirational figure in the industry, particularly what he did in his later years in trying to do as much for the benefit of others when his time was coming.”

Double Or Bubble will be aimed at bigger and better prizes next time out after following in the hoofprints of her sister Mix And Mingle to claim the Price Promise At bet365 Handicap.

Having saddled Mix And Mingle to glory in the 2017 renewal of the race, trainer Chris Wall repeated the feat with her full sister, who ran out an impressive three and three quarter length winner of the seven furlong contest on her seasonal return under Jack Mitchell.

The Newmarket handler said of the 15-2 winner: “Mix And Mingle won this race, then she won the Chartwell at Lingfield and we thought that would be on the radar for Double Or Bubble.

“She is a bit more laidback than Mix And Mingle and she will probably get a mile so the Conqueror Stakes at Goodwood on May 1st could be another option, but we will have to see how she takes the race.

“I thought she would run well as she has been working well. I didn’t quite expect her to do that but you live in hope. She was forward enough at home so we thought we would crack on.

“If we were sticking her in handicaps you would say she has won too far but she is owned by an owner/breeder and the aim is now to get black type.

“The ground went against her at the end of last season as she likes top of the ground and the ground today was ideal. She is much more laidback than Mix And Mingle and although they are very different as siblings they both have a fair amount of ability.”

The concluding contest on day one of the bet365 Craven Meeting, the bet365.com Handicap over five furlongs, went to the Robert Cowell-trained Arecibo. The 4-1 chance handed a first and last race double to jockey Oisin Murphy. 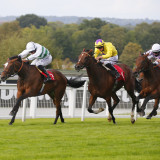