Olly Murphy is pondering plans for the exciting Here Comes McCoy who made a big impression winning on debut in a bumper at Warwick.

The Dylan Thomas gelding is owned by Chris Haughey, managing director of McCoy Contractors – who sponsor Murphy’s yard and also backed the Warwick card which his youngster was successful on.

“He’s a nice horse, and I hope he’ll go on to bigger and better things,” said Murphy.

“It was really good. They are my yard sponsors – he owns the horse, and they sponsor the day’s racing, so it couldn’t have worked out any better.”

Watch how Here Comes McCoy scored on debut at Warwick

Murphy will take a patient route with the five-year-old, and has ruled out going to the Cheltenham Festival, although the Grand National meeting at Aintree in April could be on the agenda if he passes his next test.

“I’d say I’ll go slowly slowly with him and run him in a bumper under a penalty in about six weeks’ time,” he said.

“If he happened to win again we may look at Aintree, but I don’t think he’s mentally ready to be going to Cheltenham.”

Murphy has also revealed he will give Notre Pari plenty of time to recover from his last-flight fall at Kempton before making any new plans.

The Stratford trainer said the lightly-raced five-year-old is “very stiff and sore” after his untimely tumble when he was challenging for second place in the Lanzarote Handicap Hurdle.

“He’s just going to take a fortnight to get over his fall,” said Murphy.

“He’ very stiff and sore, but he’s fine otherwise.

“I haven’t spoken to connections about a plan, We’ll wait until he’s back riding out again – I hope he’ll have a saddle on in the next week.

“It was just unfortunate things didn’t go to plan at Kempton. He’s a horse we like.

“He got a 3lb rise and he’s a horse who can be competitive somewhere in the spring.” 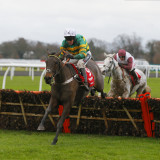