Melbourne Cup could be calling for Coltrane

Andrew Balding’s horses are in ripe form at present and Coltrane backed up his Ascot Stakes success at the Royal meeting with a convincing display in the Coral Marathon at Sandown Park.

Not So Sleepy set out to make the two-mile heat a severe test, but when that one faded, Rob Hornby’s patient ride aboard the 5-2 favourite paid off as he drew away from stablemate Silence Please with two furlongs to race and scored by 10 lengths from the staying-on Rodrigo Diaz.

Calling The Wind was a further three-quarters of a length back in third.

Balding may look towards the Melbourne Cup with the five-year-old, who has overcome a tendon injury which saw him miss the bulk of last season.

Balding said: “They are finding a bit of form. He is a great horse, this. He has been threatening to get his confidence back because he had a nasty injury which has just taken him a couple of runs to find his confidence.

“He won the Melrose and was very impressive that day, and he looked right back to his best there.

“Australia is a possibility. He has had joint surgery and seems sound now. He will certainly have an entry, but it is something we will have to assess nearer the time.

“He is in the Goodwood Cup and that is a possibility. Lonsdale, Doncaster Cup, all those sort of races (are potential targets).”

He said: “He goes to the July Sale. It was a good performance and he is a nice horse. We bought him, it was a new venture, to package him for the July sales.” 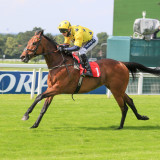 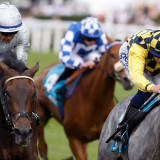