Magical is among 12 entries for the Alwasmiyah Pretty Polly Stakes at the Curragh.

Aidan O’Brien’s mare was thought to be heading to the breeding sheds after winning the Champion Stakes at Ascot last year, but in a surprise U-turn she stayed in training.

O’Brien could also run the globetrotting Magic Wand on Sunday as well as Fleeting, second in the Irish Oaks and the Prix de l’Opera last season.

Joseph O’Brien has entered  New York Girl, a running-on fourth in the Irish 1,000 Guineas, Snapraeceps, A New Dawn and Crotchet.

Ger Lyons holds a decent hand with Even So, owned by Coolmore, and the lightly-raced Roca Roma.

Jessica Harrington may run Cayenne Pepper, yet another smart three-year-old filly in her yard whose only defeat came when fourth in the Fillies’ Mile last season.

Willie Mullins has entered True Self, last seen in Saudi Arabia having previously been in Australia and Hong Kong.

On the same card, Denis Hogan’s Sceptical could make a quick reappearance in the Weatherbys Ireland Greenlands Stakes.

Just touched off in the Diamond Jubilee at Ascot on Saturday, the bargain-buy is one of 11 possibles, along with stablemate Make A Challenge.

Joseph O’Brien’s Speak In Colours, another who ran at Ascot, Aidan Fogarty’s Forever In Dreams and Kevin Ryan’s Queen Jo Jo are others to note.

Make A Challenge also has the option of running in the Rockingham Handicap, for which he is top weight.

Laugh A Minute, Urban Beat and Alligator Alley are others in the mix. 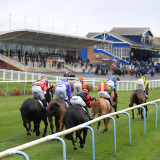 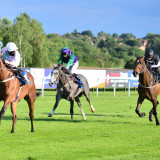 Placepot Pointers: Forever can get you off to a flyer at Leicester on Monday
Chester preview: This looks "a good opportunity" for Dark Pursuit, says Marci Botti
News Articles
Roger Charlton ‘realistic’ over Aspetar’s Juddmonte International ambitions