The midsummer highlight invariably throws up a clash of the generations – and this year’s renewal at Ascot on Saturday is no exception, with Classic form from last year and this put to the test.

Aidan O’Brien’s Love dominated her rivals when completing a Classic double in the 1000 Guineas and the Oaks last season, while victory in the Yorkshire Oaks was supposed to set her up for a tilt at the Prix de l’Arc de Triomphe.

The daughter of Galileo ultimately missed out on a trip to Paris – but having looked as good as ever when making a successful return in the Prince of Wales’s Stakes at Royal Ascot last month, she is a hot favourite to provide her trainer with a fifth King George success.

O’Brien said: “We were delighted to be able to give her the run in the Prince of Wales. She ended up making the running, but she’s very straightforward and very genuine – and everything has gone well with her since.

“She’s very versatile – she had the pace to win a Guineas and seemed to get the Oaks trip very well.

“For any Flat horse, you want nice ground – and she’s a nice mover.”

The Ballydoyle handler has a second string to his bow in the form of Broome, who has won four of his six starts this season and was last seen breaking his duck at the top level in the Grand Prix de Saint-Cloud three weeks ago.

“He’s been running very well all year and gets a mile and a half well,” the trainer told Sky Sports Racing.

“He loves to bowl along. In an ideal world you’d like to get a lead, but he is a horse who likes an even tempo. We’d be delighted if someone gave him a lead – if not he’d bowl along himself, I suppose.

“He’s in good form and seems to have come out of his last race well.”

Adayar was the least fancied of three runners for Charlie Appleby in last month’s premier Classic, but could hardly have been more impressive in the hands of Adam Kirby.

That form has been boosted by stablemate Hurricane Lane, who has landed both the Irish Derby and the Grand Prix de Paris since finishing third at Epsom – giving Appleby hope Adayar can become the first horse since Galileo 20 years ago to complete the Derby-King George double.

He said: “It hasn’t been done since Galileo, so to take Adayar there is a huge occasion.

“What surprised us at Epsom was the turn of foot he showed halfway up the run-in, because we’d never seen it before. Post-race we analysed it, and Hurricane Lane probably wouldn’t have been able to quicken like Adayar did.

“We’ve seen what St Mark’s Basilica did for that generation in the Eclipse at Sandown, and now the three-year-olds go into the big-boy division over a mile and a half.

“I’d love to think he’s still developing. It will be interesting to see what the paddock watchers say on Saturday – but he looks fantastic, and I’d be confident if you didn’t know who he was you couldn’t pick him out as a three-year-old among the older horses.”

The other three-year-old in the six-strong field for the Qipco British Champions Series contest is the Martyn Meade-trained Lone Eagle, who was denied in the shadows of the post by Hurricane Lane in the Irish Derby a month ago.

With his rider Frankie Dettori bidding to add to a record tally of seven King George wins, hopes are high that Lone Eagle can etch his name on the illustrious roll of honour.

Meade said: “It’s all systems go, and we hope he can go one place better (than in the Irish Derby), but if we learned anything at the Curragh it was to put up with disappointment.

“It was just the worst thing, getting done on the line. He was so far clear two out, and we were just about reaching for the champagne at the furlong marker, so it was hard to bear.”

Mishriff enjoyed a hugely lucrative start to 2021 – completing a big-race international double with victories in the Saudi Cup and the Dubai Sheema Classic.

He had to make do with minor honours in third on his return from a break in the Coral-Eclipse at Sandown three weeks ago, but is expected to strip fitter for the run.

Thady Gosden, who trains Mishriff in partnership with his father John, said: “He’s doing well. It’s obviously a tough race – most of the top horses around seem to be heading there.

“He’s come on for his run at Sandown and goes there in good enough form.

“He obviously ran in February and March, and it’s a long time to keep them going all season, so we thought we best give him a break before the summer.”

Having rounded off 2020 with back-to-back Group One wins, the four-year-old proved as good as ever when making a winning reappearance in the Hardwicke Stakes at the Royal meeting.

Menuisier will be keeping an eye on ground conditions before committing to a run this weekend.

He said: “There are thunderstorms forecast and a good chance of heavy showers. That doesn’t mean Ascot will get them, but as long as it remains a possibility we owe it to the filly to keep her in the race and take her to Ascot on Saturday, where we will sit and wait.

“If it doesn’t rain, we’ll come home and enjoy the drive back. But she’s been grand since Royal Ascot and she’s definitely ready for another run.

“If it’s not this weekend, then hopefully Goodwood if the ground is right, in the Lillie Langtry because we might get away with good ground against slightly lesser fillies.” 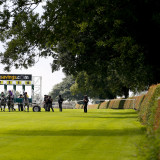 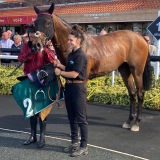