Facing only one rival in Charlie Appleby's Mythical Magic, Logician was sent off a 1-12 shot and the manner of his win reflected that price.

A sick horse over the winter, he was back on track almost a year to the day since his Classic success on Town Moor, but he was racing over half a mile less.

Frankie Dettori bounced him out of the stalls and John Gosden's grey was keen enough early, but he was not going fast enough for Mythical Magic, who took over briefly turning into the straight.

Once Dettori asked Logician to quicken, his sole rival could not go with him and he was ridden out with just hands and heels for a comfortable seven-length win.

Gosden said: "We're very happy. He came here very composed and I always think in a race like that, go and set your own pace.

"William's (Buick) horse (Mythical Magic) was keen in behind, so as soon as they got to the top of this long straight, he came and joined us. It was a nice, proper stretch - he's finished very well and comfortable under hands and heels.

"He's having what I call a nice blow, not a stressful blow. You've got to remember this horse had two months in intensive care and I can have nothing but praise for the veterinarians at the Newmarket Equine Clinic for saving his life twice, so that he can be here today.

"We're very pleased to see him back - it's been a long road."

As for the future, Goden said: "There'll be no immediate plans. He's well entered in the autumn, but I'd like to see how he is in the next 10 days before even thinking about another race.

"If you'd seen him in the clinic, as I did - I thought I'd never see him again. Just to get him back here is extraordinary in itself.

"We couldn't be more pleased at this stage, but I don't want to commit to anything now.

"Anything is possible. We're on the cusp of the autumn if we want to run again this year, but the horse will tell us.

"I think having missed most of this year, next season for a big, strapping horse like him, as a five-year-old, is very much a key option. I think one might have one's mind focused on that, as much as anything else.

"We know a mile and a half is spot-on for him, so next year he'll have races like the King George as an absolute target."

Dettori told Sky Sports Racing: "It was a good effort by the team. I have hardly seen him this year, obviously. It's well documented he's been sick.

"I rode him the other morning. He didn't give me the feel he gave me in the Leger, but he came to the races today, he went through the gears, he was moving well. OK it was a non-event, but at least we got him back.

"He's a long way from where he was, but hopefully this race will bring him on and we've got him for next year, I hope."

Line Of Departure completed a hat-trick for Roger Varian in the Weatherbys Racing Bank £200,000 2-Y-O Stakes.

After the colt failed to get his head in front in his first three starts, his Newmarket handler decided to dispose of the blinkers - and it seems to have done the trick, with Line Of Departure opening his account at Yarmouth before following up at Ascot last month.

A 15-2 shot for his latest assignment, the son of Mehmas responded to David Egan's urgings to score by a length and a quarter from 7-2 joint-favourite Yazaman.

Varian said: "He's done nothing but improve. I ran him in his first three starts in blinkers, because he didn't show anything at home.

"I don't know where the ceiling is with this horse - he gets better and better."

Burke said: "I thought she was well handicapped and I twisted the arms of the owners, including David Redvers, to let her run.

"David definitely wanted to go for a Listed race to try to get some black type and make her more sellable, but it would have broken my heart to leave a £50,000 race behind without having a runner in it.

"We'll definitely give her a shot at black type now. She's in the Redcar Two Year Old Trophy (October 3), and there's also the Bosra Sham at Newmarket at the end of October." 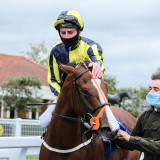 The Score's top tips for Monday: Rely on Girl power at Hamilton 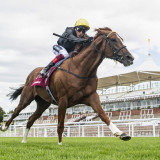