Tom Thurgood takes a closer look at the Grade One feature and nominates the likeliest winner of the race, live from Naas this Wednesday on Racing TV.

A midweek treat always goes down well and some lovely prospects go head-to-head in Grade One action on Wednesday in the Lawlors Of Naas Novice Hurdle, live on Racing TV.

The first top-level contest of the year in Ireland, this race was thankfully saved from the abandoned card at Naas last Sunday and most of the original declarations remain in contention once again this time.

Here's a closer look at the eight contenders plus a big-race verdict.

Positives: A second-season novice with experience to count on, he shaped better than the result in all three starts last term and is two from two this season, most recently with a likeable success at Grade Two level. He jumps well and conditions will be no problem.

Negatives: He's keen to get on with things and can’t afford to be too wayward in his toughest assignment so far. This test is fine, but he looks like a future three-mile chaser and you wonder if some of the others might just be a tad too sharp for him. His Grade Two victory last time lacks a little substance with the hot favourite failing to fire and plenty running too freely off a steady gallop.

Verdict: He’s enjoyed a good season and arrives here in good form but, for a horse who has generally been under-rated in his career, the market seems to have latched on and he seems short enough at the prices now.

Positives: He made a winning start to his career in Ireland at Punchestown last time, ultimately jumping well and landing the odds in cosy fashion under a confident ride from Paul Townend. They went a good pace in that race and he’s by Blue Bresil, so going up three furlongs in trip is likely to bring further improvement.

Negatives: The step-up straight to Grade One company looks telling, but the bare form of the Punchestown race is nothing to get excited about and others here boast better form. He doesn’t hold a typical profile for a Willie Mullins runner in this race; since 2000, you’d expect a Closutton contender with more hurdles runs and/or top-class bumper form.

Verdict: A fascinating runner for the in-form champion trainer who has a typically good hand with his novices this year. He needs to step up, though you strongly suspect he will.

Positives: A very exciting prospect, landing his bumper in scintillating style last season for a trainer that has a moderate record in those contests and his form with Ferny Hollow on hurdles debut – over a trip short of his best – is among the best on offer here. He measured his obstacles quickly last time and looked sharper than on seasonal debut. He is tactically versatile and can make the running.

Negatives: This is his toughest assignment so far and he lacks the experience of some of his rivals.

Verdict: A fine prospect and third favourite for the Ballymore, he matured nicely from his first to second start this season and the trainer's novices typically improve with racing. He is well-placed to provide owner Brian Acheson and Robcour with a first Grade One success.

Positives: He made a big impression on hurdling debut in October after shaping better than the result in a red-hot Fairyhouse bumper last term. He is a particularly fluent jumper, held in high regard by his stable and this intermediate distance definitely looks his trip.

Negatives: He handled softer conditions last time, but he did seem to particularly enjoy himself on a sounder surface at the start of the season. He can be wayward in his races and can’t afford to expend unnecessary energy in this company.

Verdict: He's potentially a tad over-priced here given too much use was made of him last time and he lost his jumping rhythm. If he settles better back up in trip and under first-time rider Sean O’Keeffe he could outrun his odds.

Positives: He’s made a bright start to hurdling, beaten on jumping debut by a smart horse of Gordon Elliott’s despite not doing much wrong and making amends in effortless fashion at Fairyhouse last time. He handles testing ground, is unexposed at this intermediate trip and has more to offer. He jumps very well.

Negatives: He had an easy race last time, but conditions were still testingand that was only 10 days ago. Connections may have elected this race as a slight afterthought given how well he won last time.

Verdict: Another really promising prospect in this line-up and, of all the contenders, looks the most obviously over-priced.

Positives: A solid and consistent novice who has yet to finish out of the first three over hurdles. Last time represented his best effort, finishing third in Grade Two company behind Ashdale Bob. He jumps nicely and is still unexposed at two and a half miles.

Negatives: His overall form seems a little lacking in this grade and there is no obvious reason why he can turn around the form with Ashdale Bob, currently third favourite in this market.

Verdict: A grand type, but one who looks up against it in a competitive field.

🗣 @ihrbie Clerk of the Course, Brendan Sheridan, talks us around the track

Positives: Bred for stamina but performed well in bumpers, particularly taking the eye with his finishing effort on debut in a Fairyhouse bumper which threw up 10 subsequent winners. He is a winner over hurdles and has twice run at pattern level.

Negatives: His past two runs are on testing ground over three miles and it’s questionable whether he has quite the speed or innate class to genuinely figure here. He can make jumping mistakes and he is the trainer’s second-choice on jockey bookings.

Verdict: While he hasn’t done badly over hurdles so far, his bumper career arguably promised more at this early stage.

Positives: Finally got his turn last time, and over the minimum distance despite shaping as if intermediate trips would suit him best. He has plenty of experience over hurdles this season and rates the principal hope of his excellent stable.

Negatives: He has been turned over twice at short prices and looks more of a high-class handicapper in the making as opposed to the potential top-notcher that some of his rivals here might prove to be. Despite his experience, he can put in some indifferent leaps.

Verdict: He is consistent on the whole and his form doesn’t have a bad look to it overall, but it’s difficult to see him genuinely shaking up the market protagonists if they run their races.

Five last-time out winners feature in a really interesting race - one which augurs as much for the future as for the more pressing concern of deciding a new Grade One winner.

BOB OLINGER looks the right favourite and he’s not one I’d want to oppose. I think he is the likeliest winner but early quotes of 6-4 don’t especially stand out given the collective ability of his opposition as a whole. If he drifts to 7-4 or bigger, I would probably get involved and that would be my principal view on the race.

The one who looks the most obviously over-priced is FLANKING MANEUVER at 20-1. Perhaps they were longer-term projects he beat last time, but I don’t think they were mugs and he’s surely been overlooked. The 10-day turnaround is a concern and there could be an element of blowout here, so I’d keep any each-way stakes fairly small.

Click here to join Racing TV - the home of British and Irish racing! 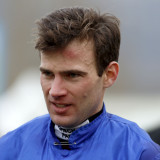 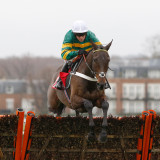