Shergar Cup: Ladies team off to the perfect start at Ascot

Joanna Mason got the Ladies team off to the perfect start in the Shergar Cup when steering William Haggas’ Amanzoe to victory in the Dubai Duty Free Shergar Cup Curtain Raiser Classified Stakes.

Victory for Mason, making her first appearance in the multi-team event as a replacement for Hollie Doyle, was never in doubt once the 5-2 joint-favourite hit the front in the home straight, sending both rider and the defending champions to the top of the leaderboard with 15 points.

“It’s a long old straight here, isn’t it?! I hoped I could do the girls proud,” said Mason, who was favourite at the start of the day to take the Silver Saddle title awarded to the top rider.

A delighted Haggas said: “She is improving. She won very nicely and has been given a perfect ride.

“One of the reasons the Shergar Cup is so successful is that it gives everyone a chance to meet a few foreign jockeys.

“It is a real global event and it is terrific that the girls have got a good start. Jo has proven that, given the right ammunition, she is just as good as anyone.”

He added of his winner: “I think we have to go to stakes races now. She has won off 90 today and will go up to about 94 of 95. She likes fast ground, though. She has had five runs in about five weeks, it seems. We will have to think about whether she has a break or not.

“She got a nice tow into that. She hit a flat spot at Sandown and the ground was a bit slower there. She likes this quick ground and has small feet – she flies off it.

“I wonder whether she will get further. She is full-sister to Rivet, who won the Vertem Futurity as a two-year-old.” 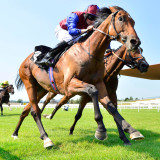 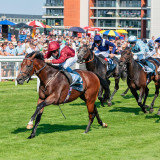 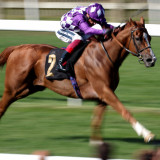