They say that lightning doesn’t strike twice, but it did at Haydock on Saturday when Sam Twiston-Davies defied mindboggling odds two times in the space of little more than an hour.

Twiston-Davies and Stolen Silver were matched at 999-1 to small money in-running on Betfair before somehow getting up to beat Edwardstone and Thebannerkingrebel in the Grade Two Sky Bet Supreme Trial Rossington Main Novices' Hurdle.

Then, having caught his breath, the jockey again produced a remarkable late show to snatch The New One Unibet Hurdle – a Champion Hurdle Trial named after his long-time ally – in the last stride after it looked certain that Pentland Hills would win.

Twiston-Davies comes from the clouds on Stolen Silver

Ballyandy traded at 699-1, while the runner-up, pipped by the smallest of noses, inevitably traded at the minimum price of 1.01. There was £27,000 matched on him that those odds.

Twiston-Davies was also runner-up on Muratello later on the card – this time being unable to conjure up a hat-trick of final flourishes.

“They are both Incredibly tough horses. Both found the track a little bit sharp but they stay well and that’s key when the ground gets tacky,” Twiston-Davies said of his unlikely victors.

“Stolen Silver has been well trained by Dad. He relaxed a lot better and is getting better at it [racing]. It was an honest gallop and once I’d got him out it was a case of keeping him there.”

Turning his attention to Ballyandy, he added: “He doesn’t know when to give up. He’s a very honest racehorse.

“I was a bit frustrated because I got in an awful muddle with my reins and stick. In the end I put them both down and just pushed and kicked as hard as I could.”

The jockey, enjoying a stellar season, had wanted to keep Ballyandy to handicap company but the nine-year-old had been placed in Champion Hurdle trials at Cheltenham and Kempton last month before this triumph.

He said: “Dad’s done it again and again. I felt we should be running in handicaps but he was not having it. He’s a genius, isn’t he?

"He's in the Champion and if it came up soft he might nick some good prize-money. He's very honest, has a lovely attitude and loves that ground."

His delighted father said: "He's my son, so of course I'm going to say it, but I think he's the best jockey in the country. I don't think anyone else would have won on those two today.

"I thought he'd got there [on Ballyandy], but then I started to doubt myself. I was screaming him home.

"In these small fields they go very steady and that doesn't suit him. He's proving what an idiot I am because at the start of the season I ran him over three miles at Wetherby.

"Until we have a five-day Festival with a two-and-a-half-mile race he'll run in the Champion."

Ballyandy is a best-priced 33-1 for the Champion Hurdle, with Stolen Silver 25-1 for the Supreme.

The late drama at the Lancashire venue revived memories of the incredible late thrust that Buster Edwards produced to win the staying handicap hurdle at the venue at the end of last year. He, too, was matched at 999-1 in-running. 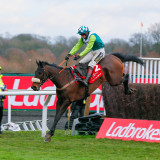 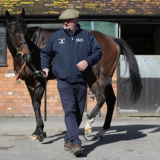 The Cheltenham Festival: Get all the inside track from Paul Nicholls' media morning
Champion Hurdle favourite Epatante "to be monitored" after health scare
Richard Johnson feeling great after comeback double at Musselburgh

The Cheltenham Festival: Get all the inside track from Paul Nicholls' media morning
Champion Hurdle favourite Epatante "to be monitored" after health scare
Betslip
JoinLogin
DepositLogout