Our Irish tipster bids to kick off the new year in style and recommends an each-way treble on Saturday's card at Fairyhouse, with all eight races live on Racing TV.

The Dan Moore is the feature at Fairyhouse, which stages an appealing card on the third weekend of a difficult year.

The days are getting longer and Cheltenham is getting nearer; it is important to keep positive about the year ahead and, as such, here's a lovely each-way treble to enrich your hopes for 2021.

The form of her point win ties in with Sayce Gold, a smart mare, and suggests she is good enough to win a maiden hurdle now having joined Gordon Elliott. She has a lovely pedigree and should be able to beat Manitopark AA. By Walk In The Park, a hugely expensive sire by Jumps racing standards, that mare was talked up before her Navan debut but found nothing for pressure and now steps up notably in trip with a hood.

With so many of these out of the handicap and with 16 runners, you have to pursue an each-way bet here and Entoucas is bullet-proof. He's unexposed, jumps really well, finished second the last three times and has already gained handicap experience.

Barry Connell has run four horses over fences and three of them have won. His best hurdler is King Alex, rated 125 after three wins and a second in his last four runs. He is clearly a handicap blot here and could actually be better over fences, given his size and technique shown at Limerick for a previous trainer. He likes to stay out of trouble in attack and an adequate round of jumping should do. 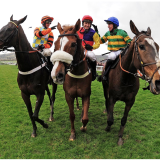 The 2021 Cheltenham Festival: A super statistics for each of the 28 races
News Articles
Champion trainer John Gosden to share training licence with son Thady
Buveur D’Air will not attempt to win a third Champion Hurdle, Henderson reveals
Quilixios camp yet to decide between Boodles and Triumph for unbeaten juvenile
Betslip
JoinLogin
DepositLogout