Irish horse racing expert Johnny Ward has two bets at Tramore plus one at the Curragh. Watch both meetings live on Racing TV.

He obviously should win, but odds of 4-9 quoted on Friday make no appeal. Even if you had the inside track as to his wellbeing at home, he has raced once this season and is being prepped for a late-term campaign.

This filly has a little bit to find with Lasmuigh based upon her outing at the Curragh two starts ago, but it's pretty clear she's ready to win a nursery.

She got impeded from another rival leaving the stalls at Sligo last time and endured a messy trip, but still stayed on well.

It has been a feature of her races that she can run around slightly under pressure, but she is clearly quite talented at this level.

It must frustrate Kevin Prendergast that we're in August and he hasn't trained a winner this year yet - that may not have happened in around half a century.

He's been very unlucky, though, and the beautifully bred Alaroos has a lovely opening her.

She looked up against it a bit at Galway last time out but excelled herself on her first try over the trip, beaten a length, and this is less competitive.

This son of Churchill ran well below-par when I tipped him at Fairyhouse in July but Michael Halford reaches for blinkers here, and his charge looks a winner in waiting based upon his eye-catching run at Limerick two start ago. He's worth another chance. 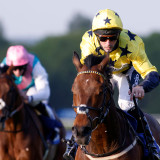