Some days you can sift through multiple races and not particularly fancy anything. On other days every other contest seems to contain a good bet.

It’s a case of the latter for me heading into a Saturday headlined by the Al Shaqab Lockinge Stakes at Newbury. Lope Y Fernandez looks a cracking each-way wager in the feature and I’d much rather be with him at 13-2 to at least make the frame than support Palace Pier to win at about 4-6, as I outlined on Thursday.

However, he doesn’t make the team in my Super Heinz on a day full of superb action on Racing TV. Not many of my seven are fancy prices but, collectively, I’m hoping they can yield a profit. At least the dreaming bit is for free.

Has always been held in the highest regard and looked a bit special when cruising clear in the John Porter here on his return last month. His most striking display last year came when winning by ten lengths on soft ground at Newmarket, so any further rain will not inconvenience him. Logician is officially rated 3lb superior and is also in receipt of 3lb, but the 2019 St Leger winner ended last year under a cloud and lacks a recent run. Several of the others in the field are stayers who appear vulnerable dropping back in trip.

Those who were part of the plunge on her when. she made her debut over this 7f trip at the Craven meeting – she went off at 7-2 after being 25-1 – never had an anxious moment as she whizzed home by seven lengths. Jane Chapple-Hyam admitted afterwards her work with established stablemates had encouraged some of her team to invest. I’m not sure Bellosa beat very much and she is quickly up in class, but the time she clocked first time up suggests she’s well-above average and that her entry in the Group One Coronation Stakes might not be fanciful.

His profile is not dissimilar to Cannock Chase, who won this off a rating of 89 for the Stoute/Moore combination in 2014 en-route to winning in pattern company at Royal Ascot and, further down the line, a Group One in Canada. Bay Bridge makes his handicap bow off a mark that is 1lb higher following an impressive comeback win at Newcastle when upped to this trip for the first time. The well-held third that day won a Beverley handicap in fine style off 75 earlier this week, (he now has to be in the 80s) so I imagine the official assessor is twitchy. Bay Bridge has got bags of potential and, while that remark is applicable to several in this line-up, the general 9-2 on offer is appealing.

I imagine Jumby went into several notebooks/trackers after his comeback third to Creative Force over course and distance at the Craven meeting as he moved with purpose on his handicap bow but got hemmed in on the rail. Once in the clear, he kept on well to make the frame but the damage had been done. He immediately looked one to be with next time, and the form is strong with the winner following up off an 8lb higher mark and Rohaan, who was fifth, since winning a Group Three prize at Ascot. Jumby, who runs off the same mark, is entitled to be sharper and is still improving. In addition, William Buick rides him for the first time.

I’m eager to find a bet in this because the form of Ametist's wins is nothing special and he looks a bad favourite at about 5-4. The one who interests me at a general 14-1 is Walhaan, who has hinted he has a big handicap in him and has his first start for James Tate. He’s been a non-runner on two occasions this term, being a late defector from the Victoria Cup last weekend because of soft ground. To me, that’s encouraging because it clearly indicates that connections are not interested in a quiet run down the field and a possible reduction in his rating. On the contrary, Walhaan probably needs to go up a few pounds to be competing in the top handicaps and winning this would help. A couple of his runs at Ascot last year give him excellent claims.

This a progressive sprinter going places. He was making it five wins from nine starts over 6f when scoring in commanding fashion on his return at Ayr last month and the form was given a timely boost on Thursday when Bielsa, the runner-up, went close in a competitive contest at York. Commanche Falls is up 7lb but he’s a dual winner here at Thirsk and there is more to come. There’s nothing among the opposition that frightens me, although Rathbone hinted he was returning to form at Chester last time over a 7f trip that stretched him.

William Haggas landed this with the brilliant but ill-fated Sea Of Class in 2018 and Sea Empress, who carries the same silks, is another daughter of the owner’s Sea Of Stars. Her fluent debut defeat of Teona over a mile at Newcastle in October reads well, with the runner-up bolting up next time and running much better than the bare form suggests when third in this week’s Musidora. Sea Empress should have no problem staying ten furlongs and her pedigree points to softish ground being no issue. She’s no bigger than 12-1 for the Cazoo Oaks, but keep in mind that Haggas resisted Epsom with Sea Of Class.

Angus McNae's horse racing tips: Silver can be talk of the town 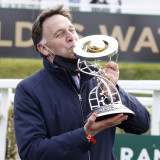 Angus McNae's horse racing tips: Silver can be talk of the town