How To Bet £20 on Saturday: Burrows ace can bloom at Haydock

Anmaat looked a horse destined for bigger things when landing the John Smith’s Cup on his return and he rates a decent bet, at a general 5-1, to follow up in the Betfred Rose Of Lancaster Stakes at Haydock on Saturday.

The bounce factor is a niggle given that he was defying a nine-month absence at York, but he’s had four weeks to catch his breath and trainer Owen Burrows suggested afterwards that the delay in getting him out had been merely because he had been slow to come to hand.

That offers encouragement that last year’s Cambridgeshire runner-up will continue to climb the ranks, much like his grandsire Halling, who graduated from winning handicaps into a multiple Group One winner.

Anmaat carried Shadwell’s second colours at York but sustained late money for him led to him going off joint-favourite, even though he had to concede weight to all bar one of his 21 rivals in what is always one of the most competitive handicaps of the year.

The way he swept through to lead on the outside was impressive and Achelois, the runner-up, who was getting 10lb, has been among several to subsequently frank the form by since returning to the Knavesmire to land a Listed prize.

This step up to Group Three company is a natural progression and this is his trip, plus he’s shown himself to be versatile regards the ground in his previous eight runs.

The official ratings suggest Grocer Jack, a runaway winner against four rivals at Newbury last time, has 9lb in hand of Anmaat. And as a consequence the layers have him no bigger than 7-4, and as short as 11-8.

However, the form of that minor Newbury race is flimsy and, in the circumstances, the assessor may well have got carried away in elevating the front-runner 8lb to a mark of 118. He’s a smart horse but nothing in his previous 16 races suggests he’s worthy of such a lofty mark.

The main supporting race on the card is the British Stallion Studs EBF Dick Hern Stakes and, not surprisingly, the game and in-form Oscula is a short-priced favourite. She has an outstanding chance on form but this will be her sixth start since June 22 and, given she had to pull out all the stops to win at Glorious Goodwood last time, I’m happy to take her on.

Floral Splendour is the complete unknown quantity in the field, having won a 7f maiden by six lengths at this track in mid-July. She probably didn’t beat much and the time was nothing special but the manner in which the daughter of Farhh surged clear in the final furlong, despite being green, was most taking. Take a look, below.

This step up to a mile seems sure to suit and we know the track will hold no terrors for her. She must have since pleased James Tate because he’s not one to tilt at windmills and he might easily have taken smaller steps with her. At 11-1, Floral Splendour is worth risking.

At Ascot, it’s Dubai Duty Free Shergar Cup Day – a meeting that represents marmite for most punters because of the team format, reserves being a possibility and jockeys riding horses they are mostly unfamiliar with. Personally, I’ve no problem with betting on it, with the same rules as ever applicable.

Kerrin McEvoy is among those travelling over to participate, for a third time, and the three-time Royal Ascot-winning jockey is fancied to get the most out of Bowman, who looks overpriced at 16-1 to land the Dubai Duty Free Full Of Surprises Classified Stakes.

The Laura Mongan-trained four-year-old likes to bowl along at the head of affairs but did too much, too soon in a competitive contest at Glorious Goodwood on his latest start. He had been in fine form before that and, unlike last time, there’s the prospect of him getting a relatively soft lead under his superb jockey in what is a less competitive race.

Orbaan is a short-priced favourite after his emphatic win in the Golden Mile but that was his first win for two years – and 22 starts – and he’s not an obvious type to follow up dropping back in trip. In any case, Bowman had him more than two lengths back in third when winning at Epsom on Derby Day and meets him on the same terms.

Sterling Knight rates the best bet of the day in the Sprint. He is only 5lb higher than when a decisive winner over course and distance in May and showed he was far from handicapped out of things when a staying-on third in a strong race at Windsor on Monday night.

I had to look twice when seeing he was chalked up at 14-1 and guess he’s that price because Takeshi Yokoyama, an unknown to most odds compilers and British punters, will be on board.

However, the 23-year-old has quickly developed into a household name in Japan with his five Group One wins last year including Classic triumphs in the Efforia in the Japanese 2000 Guineas and Titleholder in the Japanese St Leger. Sterling Knight will be Yokoyama’s fifth ride on the card and hopefully a few more will be familiar with him by Saturday night.

No jockey has enjoyed more success at the meeting that it’s No 1 cheerleader, Hayley Turner, and her best chance of another success may be Manaccan in the Dash.

He is the least exposed runner in the line-up and ran a cracker when beaten about a length into fifth in the 27-runner Palace Of Holyroodhouse Stakes – a race exclusively for three-year-olds - over course and distance at Royal Ascot.

He’s only 1lb higher here and is up against older, far more exposed opposition. John Ryan’s charge has also since run another good race at Chester, a track hardly designed to bring out the best in him. 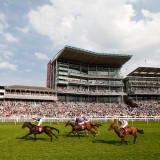