There’s a really entertaining mid-week card at Wincanton on Thursday where the handicaps have attracted good numbers, so hopefully I can find a winner or two from these.

And don’t forget, Racing TV are offering a free one-month trial at the moment! Click here for more details.

Imphal well beaten at Ascot last time out but, in all probability, improved again finishing second to a seriously well-handicapped rival trained by Gordon Elliott who had been backed off the board, and scored easily.

The eight-year-old is now 2lb higher, but in a race where it is hard to see anything making sudden, unexpected improvement, he is taken to continue his progress.

He was ridden by an inexperienced 10lb claimer the time before and didn’t get going in time, but is almost certainly a horse that requires strong driving, and definitely gets on well with Jamie Moore who has scored twice on him already this season.

A lot of his rivals here would qualify for veteran’s chases and Oneupmanship certainly looks the improver in this field.

He is bred to be a staying chaser and might well have won last time out on his debut over fences as he was going very well when falling two out.

Alhough it is taking a chance backing such an inexperienced chaser over Wincanton’s tough fences, I am happy to side with him.

He has always looked the part and this 0-120 grade might well be just the starting point for him, whereas others in the field are used to running in a lower grade.

Was sent off at 6-1 on his latest outing after being dropped 4lb following a promising return to hurdling on his seasonal debut, so was clearly expected to at least run well.

He ran very disappointingly but has been dropped a further 5lb from that outing, which puts him on a mark 11lb below his last winning rating over hurdles.

Sam Thomas is a trainer not doing a lot wrong this season and has changed the headgear here, which is interesting.

Charlie Deutsch is back on board and although he will have to do a lot more than last time, I think his likely odds will make it worth the risk in a very trappy looking race. 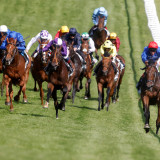