A former Cheltenham Festival winner is among Dave Nevison's two selections at Haydock on Friday, plus our top tipster also has a fancy in the finale at Newmarket. Watch both meetings live on Racing TV.

This is a really competitive handicap, but it might be worth chancing bottom-weight Foden, despite the fact he has been absent since winning on his reappearance in April.

That run came after a six-month absence, so he is clearly able to go well after a break, and his trainer, Richard Hannon, has his string in very good form.

Foden is the only one in this race who looks as though he could be seriously well-handicapped. He is now 5lb higher than his latest victory at Beverley, so runs off 81 here, but the two he beat there are now running off marks in the 90s and high 80s, so it is pretty clear that was a very strong handicap for the grade.

A positive market move after an absence would also be encouraging.

Won the Triumph Hurdle in 2019 and his latest outing was in the Champion Hurdle the following season. He is the most interesting runner on Friday’s card at Haydock and reappears on the flat off a rating of 69, the same mark he won his last handicap on the level off for Chris Wall before running up a sequence in juvenile hurdles.

He has clearly been an improved performer since joining Nicky Henderson’s and has had a choice of engagements this week, so I am making the assumption he is fit for his belated return to action.

There seems to be plenty of similar types to Stormy Ocean reappearing in the Godolphin blue this autumn, and this extremely well bred, and expensive purchase, has every chance of making up for lost time.

He was sent off at evens when he won his maiden at Newcastle in January and then everything went wrong for him on his handicap debut at Wolverhampton where, from the widest draw, he saw too much daylight and did too much early, therefore was a spent force in the last furlong.

The Frankel gelding still ran creditably, though, and all the horses placed around have all been rated higher now, so it was a good race.

The one worry is that he will be very fresh after such an absence, but hopefully William Buick will be alive to that possibility. Appleby hoping for last laugh in title battle with Haggas 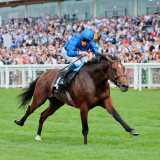 Charlie Appleby: my team for Newmarket on Friday and Saturday
News Articles

Appleby hoping for last laugh in title battle with Haggas