The Virgin Bet Ayr Gold Cup Festival is one of Dave Nevison’s favourite meetings of the year and our pundit and tipster gives you his top tips for day two. Enjoy Friday’s bumper £190,000 card live on Racing TV and Racing TV Extra.

She has never run outside of Listed or Group class since her winning debut, performing with great credit on most occasions. This might represent her best chance of winning such a race.

Teresa Mendoza is drawn in stall 12 and is quite close to very fast pace-setters like Tweet Tweet. She looks capable of overhauling the likes of her close home.

Teresa Mendoza didn’t get a clear run in the Group Three Phoenix Sprint Stakes at the Curragh last time and will appreciate this easier grade, too.

Linda Perratt has been in good recent form with horses picked up from top southern stables and Pockley this ran very well on stable debut at the end of August. He came up against the very well-handicapped Bowman on that occasion, who has franked the form since.

Pockley has not won for a while but should get a race run to suit him in this cavalry charge and will no doubt be staying on well close home. Provided he doesn’t go backwards from his first run he is off a good enough mark to figure.

He’s been running himself down the weights all season and is now 16lb lower than his last winning mark – and perhaps significantly now off the 75 rating from which he first won in handicap company.

Bavardages signalled his turn was due last time in a small-field handicap at Carlisle, getting to within half a length of the winner despite his inexperienced amateur not helping him too much close home. Paul Mulrennan takes over now and that switch could bring about an overdue win. ~

Havana Go is in-form at a low level and would have finished closer at Musselburgh last time but for having to be switched half way up the run in. He never got to challenge behind a well-backed winner and was unlucky not to place in my view. From the same mark, he looks set to get a truly-run race with the likes of Clay Ragazzoni in opposition so just needs luck in running from his inside draw.

This trip is ideal and the ground will be pretty much the same to his course-and-distance success from three starts ago. 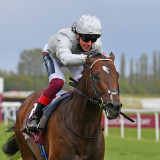