Highland Avenue made an instant impact on his turf debut to complete a hat-trick of wins for the year by leading home a one-two for trainer Charlie Appleby in the bet365 Feilden Stakes.

Arriving on the back of successive victories on the Polytrack at Kempton Park, the son of Dubawi hit the target on his first start on grass when successfully taking both a step up in class and trip in his stride in the Listed feature race.

After being angled out for a run between the final quarter of a mile of the nine furlong prize the 9-2 chance picked up well in the hands of James Doyle to sweep past long-time leader New Treasure, before keeping stablemate Secret Protector at bay by a length and a quarter.

Appleby said of his winner: “He is doing everything the right way in a fashion that we are not trying to achieve too much too soon with him. He is very much a horse that might not jump straight into the deep end just yet.

“He is mentally improving with each run. Physically, he is a big horse. Each run he is tightening up and skeletally is strengthening up well.

“He has got to do a stalls test now as I’ve taken a ticket with him the last three occasions, which I’m sure will be fine. James was very pleased with the way he travelled. He said he picked up quickly and well in what looked like and I felt was a nice field.

“The second horse has added substance to it. It was a hard choice for William (Buick) but he had ridden Secret Protector and not this one so he stuck with him. He is a horse that is probably crying out for a bit further.”

Highland Avenue holds Group One entries in both the QIPCO 2000 Guineas and the Dubai Duty Free Irish Derby at the Curragh and a Group Two entry in the Al Basti Equiworld Dante Stakes at York.

However, his trainer is keen not to overburden him at this stage of his career.

Appleby added: “He is well entered up but we are in no rush with him. If anything we would be coming back in trip with him. As this horse mentally sharpens up he will get physically sharper and he will get quicker.

“I think you are more likely to see him at a mile than over 10 furlongs. At this moment I think a Guineas might be too much. I don’t want to lose this horse just by rolling the dice with him as he has got an engine.” 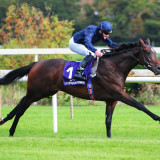 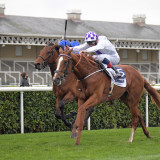