Ahead of the first virtual Henry Cecil Open Weekend this Saturday and Sunday, Newmarket-based trainers have been giving updates on some of their stable stars.

The Henry Cecil Open Weekend is raising money for Racing Welfare, the British Racing School and the Racing Centre.

Audarya was great in the Prix Jean Romanet. We had won the race twice before, so it was always a race we had in the back of our minds to aim at. We tried to get her confidence back by going to Newcastle and it worked, everything fell into place. Hopefully she can continue on an upward curve. We are going to go for the Prix de l'Opera on Arc weekend.

Powerful Breeze is great. It was a freak accident that happened. She’s healed really well and feels no pain on her ribs. She has been cantering now for a couple of months, we started her on the treadmill.

Obviously now with the year running out, we have had to fast track her, but she is responding to it. I think there remains a good chance that her season could belatedly start in the Sun Chariot at Newmarket on the 3rd October. We are taking it every day and every week as it comes.

Last season he had problems and we never got him right, so in the end we just ended his season in February. We were having trouble with him bleeding and thought we would give him a good long break and try and get him back for this season.

He looks absolutely phenomenal. I am really happy with him. He has had a great summer and we have left no stone unturned. He has just had a wind operation and we will bring him back slowly. If we can get him back for the Old Roan Chase, that would be a brilliant start but equally, he has only just had his wind operation. If he doesn’t come to hand quick enough, we will find him a new target.

Content is free-to-view but if you enjoy it please donate online 👍 pic.twitter.com/hH4YgFbc2B

Zoetic won the St Hugh's Fillies' Stakes at Newbury and with permission from the owners we will be sending her to the Cheveley Park Stakes. She may be an outsider, because she will be up against a lot of good horses, but she thoroughly deserves her place. She has earnt her black type pedigree. She is training very well and is in great order.

1 The Morning Line Reborn will be coming live from Charlie Fellowes Bedford House Stables at 8.30am Saturday morning. Join Tommo and Champ (Derek Thompson and Bob Champion) on their Facebook page as they walk and talk around one of Newmarket’s finest stables! You can also catch them the same time on Sunday, live from the world-famous Newmarket gallops.

2 Join ITV Racing’s Oli Bell for 12 stable tours with some of Newmarket’s top trainers including William Haggas, Charlie Appleby, Saeed Bin Suroor, Amy Murphy, James Fanshawe, Hugo Palmer and James Ferguson, to name just a few. While our Chairman Charlie Fellowes and fellow trainer George Scott get the inside track on each other’s yards. As an early treat, you can watch that below.

3 The Open Weekend team meet with trainer John Gosden as he puts his stable stars through their paces on Newmarket’s famous Warren Hill gallops. The maestro trainer will be offering exclusive updates on Palace Pier, Stradivarius, Logician, and of course the queen – Enable – as she continues her preparations ahead of the Arc.

🚨 JOHN GOSDEN with the latest on Stradivarius 🎻

4 Behind the scenes action from Newmarket’s integral equine sites – meet the likes of Dubawi and Golden Horn at Darley’s Dalham Hall Stud and watch veterinary specialist Emily Floyd in action at Rossdales Veterinary Surgeons. We also take you on an online tour at the British Racing School and the National Horse Racing Museum (NHRM).

5 The hugely popular Clipper Logistics Show Jumping Competition returns to the virtual Open Weekend, with top Flat jockeys Andrea Atzeni, Josephine Gordon, David Egan and Adam Kirby taking on the jumps. Make sure you tune in to see who wins this year’s crown and vote for Clipper Logistic’s most stylish rider.

6 Enjoy a sneak peak at Godolphin’s Rehoming Programme, where retirees such as Dubai World Cup winner’s African Story and Prince Bishop are pursuing new careers after their time on the track. While the Al Shaqab RoR Hacks Class at the NHRM celebrates the unsung hero of the heath, with Sheikhzayedroad and others enjoying life in retirement as working hacks in Newmarket.

7 The six finalists for the Commentator Challenge, supported by the Tote, Tattersalls and Racing TV, have been selected ahead the virtual Henry Cecil Open Weekend this Saturday and Sunday. They will battle it out in aid of Racing Welfare, with the winner collecting £1000 and the chance to commentate live at Newmarket Racecourse next year. 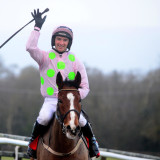