Nicky Henderson pointed firmly towards a step up in trip for Shishkin after the 6-5 favourite could only finish a well-beaten third behind impressive winner Edwardstone in the Betfair Tingle Creek Chase at Sandown.

The two-time Cheltenham Festival winner was bidding to give Henderson his third win in the race and join Seven Barrows legends Sprinter Sacre and Altior on the roll of honour for the two-mile Grade One.

However, little went right for the eight-year-old who was being niggled along from an early stage by Nico de Boinville in his first start since disappointing when favourite for the Champion Chase at the Cheltenham Festival in March, after which he was found to be suffering from a rare bone condition.

Watch a full replay of the Betfair Tingle Creek Chase

“I think it was fairly obvious from halfway down the back straight he was going as fast as his legs could carry him,” said Henderson.

“He jumped really well, and he carried himself well. He kept at it, but you always felt they were going a stride too quick for him, and it looked that way.”

Despite being outpaced going along the back and crossing the famous Railway fences, Shishkin had worked his way into a position to challenge approaching the Pond Fence that is three from home.

But a jolting mistake put paid to any chances of winning and he was eventually 15 lengths adrift of the Alan King-trained winner.

Henderson continued: “He came into the race at the third-last and he made a mess of that then he was in the car park and it was game over. I’m not going to say he was unlucky three out because he went left and he wasn’t going to win from there. The winner was great and well done Alan.

“We probably underestimate those two-mile chasers from last season a little bit. He wants to go up in trip and we won’t mess about either.

“His next run will be over a lot further than that. I’m not going to rule anything in or out. I’d like to see him in a race where he likes going the pace they are going. This doesn’t surprise me in a funny way if you watch him at home.

“He was flat out all the way in the Clarence House and stamina was the only reason why he won that. That (Ascot Chase) would be all right over two miles five or there is the Denman Chase which is a serious option.

In contrast, Paul Nicholls was delighted with the performance of defending champion Greaneteen, who went down on his shield in second.

A specialist over this course and distance, a third successive Celebration Chase on the final day of the season will now be his target for the second half of the campaign.

“He was beaten by a better horse on the day, but he has run a blinder,” said the champion trainer.

“The winner is the young lad that has come from the novice ranks and he has obviously progressed again. Harry (Cobden) said there was no excuses, and I couldn’t see any excuses. He jumped well and travelled well. The race went well he was just not good enough, it was as simple as that.

“That is obviously a very smart horse that has improved. Our number one aim for the rest of the season will be the Celebration Chase and we might go for the Champion Chase on the way if there is a bit of good ground in the spring. I wouldn’t want to run him on deep ground in the winter.”

We're all over it! Join Racing TV now to watch the best action during the 2022-23 Jumps season! 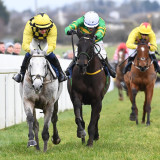 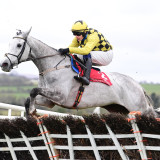