Naas preview: Harrington has Ascot hopes for It's Showtime Baby

With a total prize fund of €68,000 up for grabs, the six-furlong Group Three is the most valuable contest on Royal Ascot Trials Day in County Kildare.

Having previously struck gold with subsequent multiple Group One winner Alpha Centauri in 2017 and Servalan 12 months later, Harrington hopes to add to her tally with a Showcasing filly who won on her debut at Dundalk last month.

Watch how It's Showtime Baby scored on debut at Dundalk

“She won first time in Dundalk and has been great since,” said Harrington.

“She just wouldn’t want too much rain, she likes good ground but she’s in great form and has come on as you would expect from her debut.

“It’s an obvious next step for her and I would hope that Royal Ascot would be next for her definitely, but so is everyone else’s fillies in the race!”

Donnacha O’Brien saddles La Dolce Vita, who steps up in class after finishing a promising third on her introduction at this track three weeks ago.

He said: “She’s in good form. She’d a good run the first day, she was third first time out over track and trip.

“Obviously, she’s got to improve to be competitive in a Group race but we’re hopeful of a good run from her on Sunday.”

The first Stakes race on the card is the Sole Power Sprint Stakes, which features last year’s winner Logo Hunter and the high-class Make A Challenge.

Harrington’s Bopedro is the highest rated horse in the Listed Owenstown Stud Stakes, making his first competitive appearance since September.

“Bopedro did nothing but improve last year but the problem for him is that at 107, handicaps are out for him, so he will have to compete in Stakes races from now on,” said: Harrington.

“Hopefully he can make that step up, but he hasn’t had a run this season yet and would improve for this.”

A high-class field has assembled for the Group Three Lacken Stakes, with Ger Lyons declaring both the unbeaten Beauty Inspire and recent Navan runner-up Straight Answer.

The latter chased home Aidan O’Brien’s New York City in the Committed Stakes three weeks ago and they will renew rivalry this weekend.

Michael O’Callaghan is looking forward to running Twilight Jet, who was last seen finishing down the field at the Breeders’ Cup.

He said: “He always had a bit of size and a good mind. He’s matured a lot over the winter, both mentally and physically, and he’s a fine belter of a horse now.

“His mind is very good and I expect it will be a long year for him, with Royal Ascot his first major target.”

“Elliptic ran well in Cork the last day. She was possibly a shade unlucky not to win that day,” said the trainer.

“Blinkers seem to have stepped her up we feel, but she’s got a bit to find on ratings for Sunday’s race. We’re hoping she’ll run a good race and pick up some more black type.” 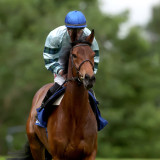 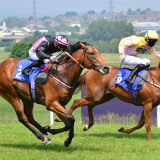 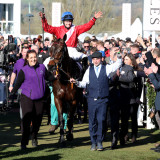