Ralph Beckett believes Feliciana De Vega may develop into a Group One contender this season.

The lightly-raced four-year-old signed off her last campaign with a comfortable win in the Darley Stakes at Newmarket.

She is by the same sire, Lope De Vega, as two other smart fillies in the yard – in Antonia De Vega and Manuela De Vega – and depending of course on the resumption of the European fixture list during the coronavirus pandemic, Beckett is hoping to run her in the Prix d’Ispahan.

He said: “I would be keen to go a mile and a quarter with her sooner rather than later. We have taken on colts with her, and beaten them.

“Ground will dictate where she goes, but there is plenty to look forward with her. Races like the Prix d’Ispahan (at ParisLongchamp) would not be out of the question for her, and those are the sort of races we will look at.

“She is quite masculine compared to Antonia De Vega and Manuela De Vega. She is a thick-set filly, and in terms of her attitude and demeanour she is laid back, and they are the ones you enjoying having.”

Manuela De Vega finished just in front of Antonia De Vega in a Group One in Germany when they last ran – finishing second and fourth.

“She was getting there all the time, but the line came too soon. Her full-sister (Isabel De Urbina) improved from three to four, and I’m pretty optimistic she will improve as well.

“We might think about the Bronte Cup at York. That was the race I had in mind, then to go from there.

“We will probably start Antonia De Vega off over a mile and a half. There was a chance of going to the Daisy Warwick at Goodwood, but that might not happen for obvious reasons.

“A mile and a half with juice in the ground is what she wants. She has a tendency to race lazily, and they didn’t really go hard enough in Germany to bring her into the race.

“At Ascot (sixth to Star Catcher in the Qipco British Champions Fillies & Mares Stakes) she was running after a long lay-off, and it was a good run – she perhaps didn’t have the miles on her to get competitive.

“It was a truncated season last year, and there is every chance she will do better again this year.”

Hereby, a daughter of Beckett’s Oaks winner Look Here, is also back for more this season – having won five of her last six.

He said: “She is back again, although I’m not entirely sure where we go with her.

“I was quite keen on the Ormonde, because she goes round Chester so well – we will have to see how things pan out, but that is one idea that would suit her well.

“We nearly retired her after she got beat at Kempton, given her pedigree.

“But her owners are open-minded how they campaign the horses, and I suggested the next run should be at Chester – and fortunately she took to it and then she went in there again later on.

“Having not started until May as a three-year-old, you would hope she would go on at four – and having not raced at two gives her a good chance.”

Did you know that 100 per cent of Racing TV's profits go back into the sport we all love? Click here for more details. 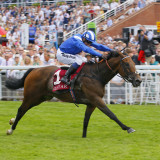 From Battaash to Stradivarius: Ten horses to savour when racing returns
Mick Halford dreaming of Guineas glory with Sinawann and Ridenza

From Battaash to Stradivarius: Ten horses to savour when racing returns
Mick Halford dreaming of Guineas glory with Sinawann and Ridenza