Graeme McPherson counted himself lucky after narrowly avoiding serious injury following an incident involving one of his runners at Huntingdon.

The Stow-on-the-Wold handler was left nursing a sore shoulder after being kicked by Dublin Four, who moments earlier had collapsed to the ground outside of the saddling boxes, before division one of the MansionBet Proud To Support British Racing Novices’ Handicap Chase.

McPherson said: “He came out of the saddling boxes and went over backwards and was motionless on the ground. I feared the worst, so I went over to see how he was and was double-barrelled. He caught me just on the shoulder, but it was enough force to knock me backwards and I just banged myself on the stable door.

Dublin Four has been withdrawn pic.twitter.com/NrtxFCm6Rj

“The shoulder is a bit sore, but I will be fine. It is a lucky escape and we live to fight another day.”

McPherson reported the six-year-old gelding to have sustained only superficial injuries.

He added: “The horse seems OK. He has skinned his front legs a little bit, just where he has scrambled around. I think he is a lovely horse, but he has just scared himself more than anything else.

“He has never shown any signs of doing anything like this and he was as good as gold last year. Hopefully it won’t leave any scars on him.”

There was plenty more drama at Huntingdon on Tuesday! Watch above how Sandy Boy swerved violently up the run in to hand Innisfree Lad the race in the penultimate contest!

After a slight delay, victory in the two-and-a-half-mile contest went the way of the Nigel Twiston-Davies-trained Guy (9-1), who put in an assured round of jumping to score by 13 lengths.

Vegas Blue made a triumphant return to the scene of her Listed bumper success, running out a 13-length winner of the Bet 10 Get 20 With MansionBet Mares’ Maiden Hurdle under Nico de Boinville.

De Boinville said of the Nicky Henderson-trained 4-11 shot: “She is a mare we like a lot. I’m not sure what happened on Boxing Day, but maybe it came a bit quick for her. Today she has shown what she really is.

“The guys at home have done a great job with her and she jumped brilliantly.”

Jonjo O’Neill appears to have a potentially smart performer on his hands in Prince Escalus (33-1), who exacted revenge on his Newbury conqueror Your Darling with a front-running success in the Covered By MansionBet Faller Insurance Novices’ Hurdle.

Winning rider Jonjo O’Neill junior said: “It was a very strong bumper at Newbury with Your Darling and Flinteur Sacre in and we were going to go novice hurdling with him afterwards in the spring, then coronavirus happened so maybe it is a blessing in disguise as he is a novice this season.”

Corey McGiven celebrated his first winner under rules after the Lucy Wadham-trained Will Sting (22-1) held on in the MansionBet Maiden National Hunt Flat Race.

The 21-year-old, who has been based with the Newmarket handler for two months, said: “It’s brilliant and I’d just like to thank Lucy and the owners for giving me the opportunity and putting me up on a nice horse.

“He can be a bit keen at home, but he settled lovely today. He did everything really well and picked up when I needed him to. 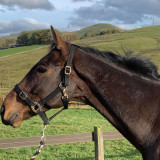