Frankie Dettori will have a “blank canvas” from John Gosden when he bids to steer Enable to victory in the King George VI And Queen Elizabeth Qipco Stakes.

The brilliant mare is bidding for an unprecedented third victory in the Ascot showpiece, having destroyed her field as a three-year-old in 2017 before regaining her crown after a pulsating duel with Crystal Ocean 12 months ago.

The six-year-old’s three rivals this weekend are all trained by Aidan O’Brien, but Gosden is relaxed about the situation as he prepares for Enable’s historic hat-trick bid.

Dettori will once again be on board the favourite, with Ryan Moore electing to partner Japan over his two O’Brien-trained stable companions Anthony Van Dyck and Sovereign – who will be ridden by Oisin Murphy and Gosden’s former stable jockey William Buick respectively.

Flashback: Enable and team after landing the King George in 2017

As usual, Gosden will not be giving the popular Italian any riding instructions.

He said: “Frankie likes to train them as well as me. I think it would be a dangerous thing if I tried to ride her – we might have a problem with the weights!

“In a race of this nature, with a small field, it’s going to be tactical. You go in there with a blank canvas – you do not, under any circumstances, say ‘we’re going to do this’. Let’s see how it pans out and see what the Ballydoyle horses do.

“It will be tactically fascinating. We always have a plan in a race, but quite often you go to Plan B, which is a blank canvas. In this one, it’s a blank canvas at Plan A.

“I don’t see anything too sinister ahead. The horses up against us are ridden by gentlemen who ride for me a lot, too.”

Gosden admits the lack of runners from other yards is a blow to the race – and hopes it is mainly a result of the delayed start to the season because of the coronavirus pandemic, rather than a wider issue.

He said: “I think we’ve walked into a freakish year. It’s disappointing that other stables from England, Ireland, France and Germany can’t produce horses for the race, but the horses just aren’t there.

“Is it the breeding programme, is it the fact that some owner-breeders aren’t there any more, is it because there is too much emphasis on breeding for commercial speed? These are questions we could debate for hours.

“The Hardwicke Stakes is often a platform to the King George. That was won by a filly (Fanny Logan) – and let’s be honest, the older horses in the Hardwicke weren’t a vintage group.

“You’ve had April and May disappear on us, because of this hideous disease, and consequently the three-year-olds weren’t able to develop through those races and be battle-hardened.

“Aidan won both the Derby and the Oaks (with Serpentine and Love), so it was his choice if he wanted to bring one of those to the King George, and he’s decided to stick with the older brigade.

“There have been lots of races with no three-year-olds, and I think next year will be a different, but there is now a bit of an addiction to breeding for commercial speed – and I think we must be very careful that we don’t start losing middle-distance races, because they are essential.” 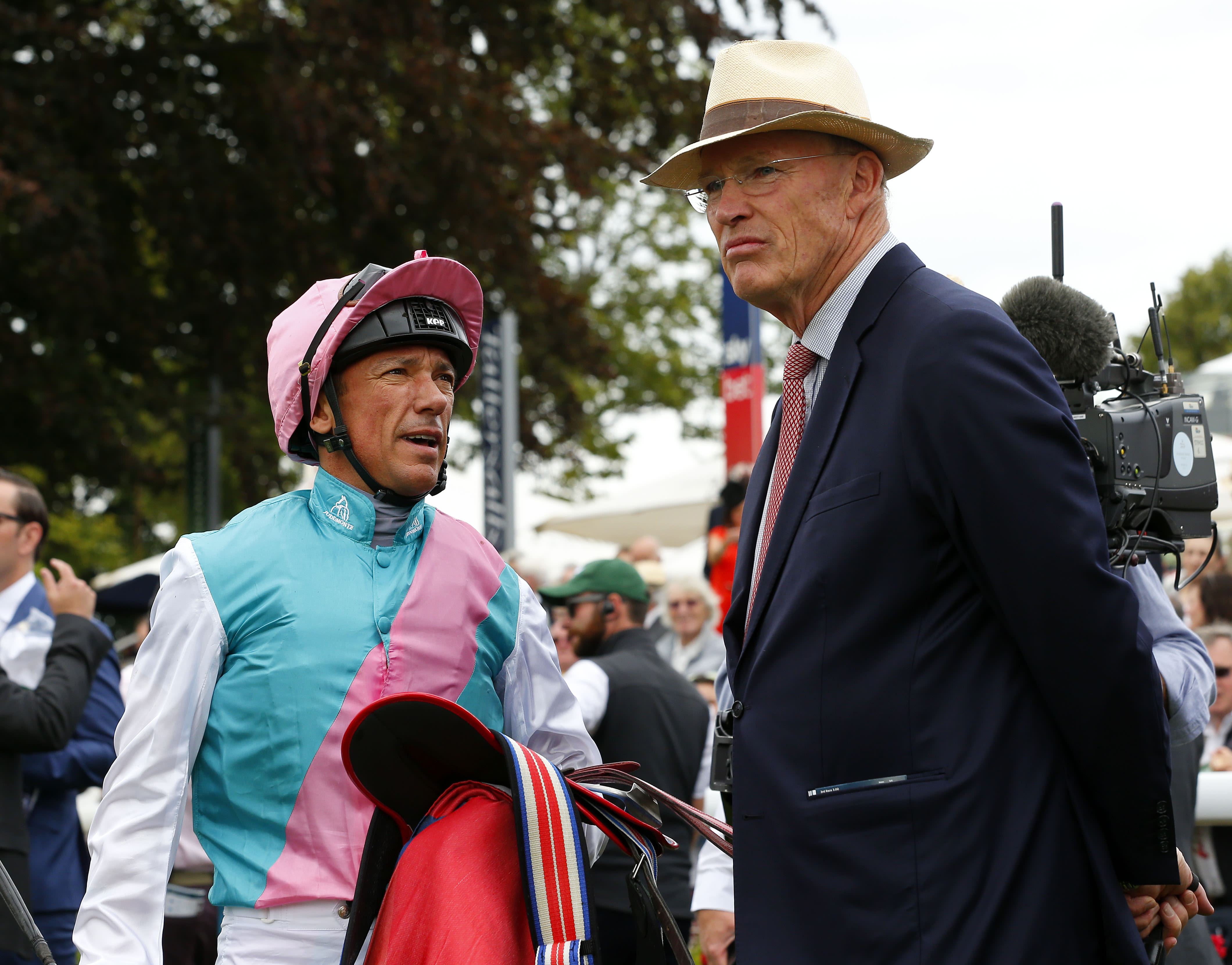 Enable is odds on to get back on the winning trail, having delighted her connections when finishing second to Ghaiyyath on her first start of 2020 in the Coral-Eclipse at Sandown three weeks ago.

Gosden stopped short of saying his superstar mare is as good as she has ever been, but is delighted with her condition.

“A lot of the old trainers tell me that a Flat horse, if they are sound and healthy, reaches its zenith as a five-year-old. I’ve seen that a lot myself,” he added in a Zoom call hosted by QIPCO British Champions Series.

“I see Enable as maybe not quite at her peak, but she has trained beautifully coming into this – the Eclipse put her right, and her work has been perfect on the Limekilns.

“She’s just been working with one other horse, not putting lines of three in front of her and mowing them down – none of that nonsense.

“I’ve let her lead a couple of works and just let her enjoy that for a change. She comes into the race in very good order.”

With both trainers bidding to win the King George for a fifth time, Japan is seemingly O’Brien’s first string.

Last year’s King Edward VII Stakes, Grand Prix de Paris and Juddmonte International winner was disappointing on his first start of 2020 in the Prince of Wales’s Stakes at Royal Ascot, but raised his game to finish only a head behind Enable at Sandown.

Anthony Van Dyck and Sovereign – winners of the Investec Derby at Epsom and the Irish Derby respectively last season – complete the quality quartet.

A HORSE WITH THE KING GEORGE IN HER BLOOD

The King George VI And Queen Elizabeth Qipco Stakes was first run in 1951 and Enable is seeking to become the first three-time winner of the race. She is already one of only three dual winners after Dahlia (1973-74) and Swain (1997-98).

Enable has more than done her bit to keep the family flag flying in the summer showpiece.

Her sire, Nathaniel, won the 2011 renewal and was beaten a nose by Danedream the following year. Her grandsire, Galileo, scooped the 2001 running, while Galileo’s own sire, Sadler’s Wells, was runner-up in the 1984 running when beaten a head by Teenoso.

Concentric, the dam of Enable, was herself a daughter of Sadler’s Wells and her dam was Apogee, who’s grandsire Ile De Bourbon, scooped the 1978 King George. Ile De Bourbon? His sire was none other than Nijinsky, the 1970 winner.

Enable had won the Irish Oaks just a fortnight earlier but came out of the race so well that a swift return to action was quickly confirmed.

Dettori restricted himself to a diet of fish and water in the build-up as she had only 8st 7lb to carry but his sacrifices proved well worthwhile as the filly hit the front two out before powering four-and-a-half lengths clear of Ulysses in rain-softened ground.

Enable was unable to defend her crown in in 2018 because of injury but regained it in fabulous fashion – edging out Crystal Ocean, at the time the highest-rated horse in the world, by a neck after the pair had a great tussle for much of the final two furlongs.

Dettori did not panic at the start, when caught wider than ideal in rear, or at the finish, when he did not resort to the whip.

Waldgeist, from France, kept on well to finis third and would gain his revenge in the Prix de l’Arc de Triomphe in the autumn to thwart Enable winning that race for a record third time.

HAS ANY HORSE PREVIOUSLY COME CLOSE TO WINNING THE KING GEORGE THREE TIMES?

The last two-time winner, Swain, was retired to stud at the end of the 1998 season and so never got the chance to try and complete his hat-trick.

Dahlia did seek to complete her treble in 1975 but had to settle for a distant third behind Grundy and Bustino in a memorable contest often referred to as the Race of the Century.

She had been a brilliant six-length winner of the 1973 running and was also impressive when retaining her crown 12 months later under a motionless Lester Piggott.

Dahlia stayed in training as a six-year-old in 1976 but raced exclusively in America. 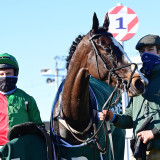