Winning the Derby on Golden Horn was my most emotional moment, says Frankie Dettori

Watch The Racing Years, a live show, every Monday, Wednesday and Friday at 1pm on Racing TV.

Golden Horn’s glorious campaign of 2015 is something that will live long in the memory for Frankie Dettori, the jockey has revealedon Racing TV.

The John Gosden-trained, Anthony Oppenheimer-owned son of Cape Cross was virtually unstoppable, and first served notice of his credentials in the Dante at York before powering to glory at Epsom in the Derby.

Dettori, who had t!eamed up for the first time with Golden Horn in the Feilden Stakes at Newmarket, opted to partner stablemate Jack Hobbs on the Knavesmire, but could only look on as William Buick and Golden Horn swept past.

However, he was back in the saddle for the blue riband and defeat never really looked likely on that first Saturday in June.

Speaking on Racing TV's new show, The Racing Years, he said: “I started working again for John that March and the first horse he put me on was Golden Horn. The rest is history really. The Feilden is a great race, it gives you an idea if they are going to be a Guineas horse or a Derby horse.

“He was doing his best work at the end, so John trained him for the Derby, but funnily enough at that stage I was probably preferring Jack Hobbs in front of Golden Horn.

Listen to what Dettori had to say on The Racing Years

“I rode him in the Dante, but when William passed me like I was standing still, I realised ‘I want to ride that one in the Derby!’. That’s what trials are for and it was very obvious Golden Horn had a different gear.

“I was actually worried about Jack Hobbs (in the Derby). I managed to use him as a reference point and when we passed the two and William got a couple of lengths on me I thought I had a mountain to climb, but once he found top gear it was all over within half a furlong.

“I’ve repeated it many times, but in all my 33 years of riding it is the most emotional feeling I’ve ever had for a particular race, to the point where I found my body going like jelly, like someone had sapped the energy from me. It was really special.

“It meant a lot, my kids were old enough to appreciate it and two years prior to that I didn’t think I’d have another chance to ride such a great horse, so it was very emotional.”

Another top-notch display followed in the Eclipse at Sandown.

“I felt he was more of a mile-and-a-quarter horse than a mile and a half, he was blessed with a lot of speed. I had to make my own running, which wasn’t ideal, but I knew he had plenty of gears to try that.

“At that time of year the three-year-olds get so much weight and I thought if I could get him out in front he’d be a very hard horse to pass.”

Watch a full replay of the 2015 Irish Champion Stakes

After Sandown the King George was on the agenda, but rain-softened ground ruled him out of Ascot and instead he reappeared in the Juddmonte International back at York in August – suffering a shock defeat to Arabian Queen.

Normal service was resumed in the Irish Champion Stakes at Leopardstown, beating the top-class filly Found – and then it was on to his crowning glory in the Prix de l’Arc de Triomphe, where he was given a vintage Dettori ride to overcome a wide draw.

Dettori – who is this week helping to raise money for the NHS through Equestrian Relief – said: “I thought if we could keep a lid on him on the outside for three furlongs, to the top of the hill, then I could slot in and he wouldn’t be over-racing with me, which he could do.

“Me and John talked about it and we walked the track. You either look great or very silly, so we rolled the dice and I came out smelling of roses. In any big race it is probably the best ride I have ever given a horse.

“But it’s OK me guiding Golden Horn – if he didn’t have the legs to win it, it would have been no good to no one, he was a great horse.”

His career ended in defeat, with Found gaining her revenge in the Breeders’ Cup Turf, but that could barely put a dent in his achievements.

Dettori said: “It rained for three weeks in Keenleand and it was like a ploughed field basically. He handled a bit of cut in the ground, but that was really labouring and his legs were spinning.

“Found got the allowances as a filly and probably handled the ground better than us, but he lost nothing in defeat. I have to put him up there as one of the greatest horses I have ever ridden.”

Watch The Racing Years, a live show, every Monday, Wednesday and Friday at 1pm on Racing TV. 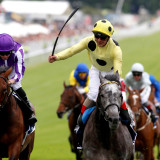 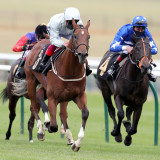 Notebooks out: Five newcomers that caught the eye on Thursday
Scare at Newmarket as window falls unexpectedly from grandstand
News Articles

Notebooks out: Five newcomers that caught the eye on Thursday
Betslip
JoinLogin
DepositLogout