George Baker has no concerns about switching back to turf with the hat-trick-seeking Surrey Mist in Saturday’s BetVictor London Gold Cup at Newbury.

The 10-furlong contest has a rich tradition for producing multiple big handicap and Group-race winners, with the likes of four-time Group One hero Al Kazeem (2011) and dual Group Two scorer Time Test (2015) among previous victors.

Surrey Mist opened his campaign with two wins on the all-weather at Lingfield and Kempton, and will be having just his second turf start.

“He has pleased us in his runs this year, albeit on the all-weather and we have no worries about going back on turf at all,” said Baker.

“He is a horse who did very well physically over the winter. We liked him as a two-year-old last year and he ran a nice race on debut. We were obviously delighted with the manner of his two wins this year and last time out that form has been well franked.

“He probably got the run of the race being close to the pace off a slow pace, but I think he is a very straightforward, progressive young horse.

“It is decent prize-money and we’ll take our chance – although we are more than hopeful of a big run.

“It is an open contest which befits the prize-money, but it is good to have horses like this to run in races like this. We head there full of hope.”

Red Vineyard has also won two of his three career starts, having scored at Sandown off a mark of 78 last month.

William Muir and Chris Grassick hope the son of Slade Power, who is a half-brother to the top-class Red Cadeaux, will develop into a Pattern-race performer in due course.

Muir said: “He is in great shape and has just kept improving, which he will do because that family just get better – and he will be even better this time next year.

“He has come out of that Sandown race very well and is showing he is in very good form, so it seems the right race to go for. He has had a few weeks since the last one and you couldn’t ask for anything better from him.

“He is now rated 83 as they have put him up 5lb. Red Cadeaux became a very good horse and his two brothers were smart – Amazing Red was rated 102 at his best and White Desert was a very high-class horse.

“Red Vineyard has done something they never did – they did not win at two first time out, but I felt he lost his strength in his second race last year.

“He is a horse who could well, in time, develop into the next Red Cadeaux. That is what we are hoping, but he will have to go out and prove that. He is still a frame of a horse and when he fills that frame he could be a Group horse – he has got that look.”

Richard Hannon saddles a trio. Marsoul had three runs in quick succession last month and got off the mark last time at Nottingham, Razzle Dazzle was fourth of six on his Newmarket reappearance and the maiden Zoom, who was not beaten far at Goodwood.

Hannon said: “Marsoul won really nicely at Nottingham, he travelled great, I couldn’t actually believe he ran badly at Newbury the time before. He’s a nice horse, he’s progressive and this is a nice spot for him.

“I was pleased with Razzle Dazzle’s first run. He’d have a chance and Zoom ran very well at Newbury in his novice race before he got qualified for handicaps, so all three of them would have significant chances.” 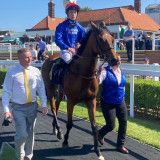 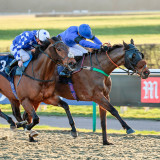