Our Irish racing expert Johnny Ward struck with an 11-2 winner in his weekend column and shares his three fancies for the second day of the Galway Festival. Enjoy every moment live on Racing TV and Racing TV Extra.

Watch our On The Wire Galway Festival Video Podcast. Fran Berry is very keen on one in the 8.15pm on Tuesday - fast forward to 22min 58sec if you are in a hurry!

It's day two at Galway and make sure to check in to the On The Wire special for our selections and perusals.

Here's an each-way treble for you. Not only are they all running in handicaps: two or all of them will be heavily reliant on luck in running at a zany track where handicaps are probably more competitive than anywhere else all year round.

What can possibly go wrong?

Razdan will almost certainly need luck in running as he doesn't break fast enough to get handy but he was a good third at the track on Monday evening, having done everything but win on his penultimate start. He'd been well-beaten in his previous two handicaps and, for all that he is tricky, he's clearly well-treated, albeit in a tough race. If he is turned out quickly, keep the faith.

John Levins has only run 13 horses on the Flat in Galway and five of them finished in the first three. It's a further positive that Chimeric finished fifth in a maiden here last year, just behind Crassus, who was touched off in the Curragh off 68 lately.

The key to Chimeric's chance here is that this race has buckets of pace and he is almost certain to be ridden to come home, as he isn't sharp enough early to do anything else. He also did all bar win the last twice and this is a better race, but his price will be the same. Rain won't inconvenience.

He has only won once - at this Festival last year - which followed a narrow defeat in this race, his only other run ever at Galway - so he clearly likes the track.

That run last year was off 69 and it looks fairly obvious he's been prepped for Galway for owner Justin Carthy. Not only is he down to 61: Joey Sheridan takes off 5lb and he's drawn 5. Positives abound. Dukey made a good case for Liberty Star on On The Wire this week; he's a danger. 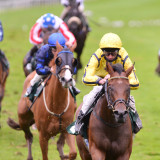 Newbury Friday preview: Get the inside track from connections
News Articles