Flying Honours bids to complete a hat-trick for Charlie Appleby and William Buick in the curtain-raising Juddmonte Royal Lodge Stakes at Newmarket on Saturday.

The Moulton Paddocks team looked sure to land last year’s renewal of the Group Two contest after Coroebus quickened clear, only for the subsequent 2000 Guineas hero to be reeled in by Royal Patronage in the dying strides.

A son of Sea The Stars, Flying Honours is all the rage to add his name to the roll of honour following successive summer wins at Sandown and Salisbury – most recently putting subsequent Newbury scorer Stormbuster to the sword in the Listed Stonehenge Stakes.

“He’s in great order. He obviously had a great form boost there (with Stormbuster) and we’re coming into Saturday very confident in what we’ve seen,” said Appleby.

“He’s been the mile now, so we know he gets the trip, and he’s going to get better as he goes further.

“He looks great and there are no negatives.”

The Saxon Warrior colt confirmed previous promise with a comfortable success at Roscommon on his latest appearance, earning him this rise in class.

O’Brien said: “Greenland is improving with racing. He won well last time out.

“He ran over a mile in Killarney earlier in the year and then won over seven furlongs last time out. We don’t think he’ll have a problem going back up to a mile and we think he’s ready for a race like this.” 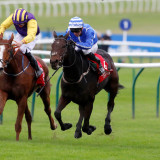