Five horses to look out for at Cheltenham’s Showcase Meeting

With racing action returning at Cheltenham this week, Harry Allwood has picked out five key names among the contenders to look out for over the two days at The Showcase Meeting, live on Racing TV.

Racing action returns at Cheltenham this week, and there will be some star names in action at The Showcase Meeting on Friday and Saturday, as well as some exciting prospects for the months ahead.

Plenty of stars have emerged from this meeting in recent years, including the likes of Dodging Bullets, Tiger Roll, Sceau Royal and The New One, and Grade One winner My Drogo finished runner-up on his debut at this meeting 12 months ago.

Following 10mm of rain on Wednesday evening, the ground was changed to good, good to soft in places on Thursday, and with no further rain forecast, conditions are unlikely to change.

All 14 races will be shown live on Racing TV, and while the five below are not tips, they are horses who are worth keeping a close eye on with the next few months in mind.

Fourth in the Champion Bumper in 2020, Third Time Lucki showed some strong form over hurdles last season, including when sixth in the County Hurdle at the Cheltenham Festival where he travelled like the best horse in the race before fading in the final 100 yards.

He ended his campaign with a creditable fourth in a Grade One Novices’ Hurdle at Aintree, although weakened quite quickly once he came under pressure there, and it is no surprise to see he has undergone a wind operation since.

Champion jockey Harry Skelton was quite vocal about Third Time Lucki’s chances ahead of the Cheltenham Festival last season, and connections have made it no secret that they hold their six-year-old in high regard.

Dan Skelton has pinpointed the Henry VIII Novices’ Chase, which connections won with Allmankind last year, at Sandown on December 4 as Third Time Lucki’s early-season target and, with Grade One contests on the agenda, I expect the Skelton team will be disappointed if he is not able to make a successful chasing debut here.

He does meet some strong challengers, though, including the Paul Nicholls-trained Fidelio Vallis who has already shown a useful level of form over fences, and has the advantage of race fitness.

Last year’s Ladbrokes Trophy winner who progressed rapidly over fences last season and was sent off the well-backed 11-2 favourite for the Grand National in April.

However, things did not go to plan for Jonjo O’Neill’s charge in the Aintree showpiece - he was pulled up before three out having stopped quickly – and connections were quick to point out that a wind problem may have been hindering him.

The nine-year-old has been given a wind op since and reverts back to calmer waters at Cheltenham on Saturday where he will attempt to carry top weight to victory, and record a poignant success following the recent passing of leading owner Trevor Hemmings.

Although Cloth Cap finished third in this Class 2 contest 12 months ago behind Frodon, it will no doubt be a stepping stone to loftier targets this season, and he is now on a career-high rating of 156.

After creating a huge impression in the Adonis Hurdle on his second start over hurdles in February, this useful flat performer was sent off at 4-1 for the Triumph Hurdle at the Cheltenham Festival, but failed to land a blow after racing exuberantly.

It later emerged that the youngster scoped badly afterwards, and he has since run respectably in two starts on the flat, including when midfield in the Duke Of Edinburgh at Royal Ascot.

Alan King’s exciting prospect remains with bundles of potential over hurdles and looked a Grade One performer in the making at Kempton, so I expect connections will have dreams of him contesting the Champion Hurdle next year.

Stepney Causeway has won his past four starts impressively over hurdles and is among Tritonic’s rivals on Saturday, as is I Like To Move It, who finished ninth in the Champion Bumper last season, and was successful on his hurdling debut at Worcester this month.

Tritonic has to concede 8lb to both of those contenders and it will be interesting to see how he fares on his return over obstacles.

After returning from a lengthy absence off a rating of 132 at the start of last season, Sky Pirate progressed into a smart handicap performer over the winter and ended the season on a rating of 159 following his victory in the Grand Annual at the Cheltenham Festival.

He is only an eight-year-old, so may not have finished progressing yet, but his career-high rating will make life tougher for him this season, especially as he will carry at least 9lb more than his rivals on Saturday.

That said, he doesn’t need to improve much further to be considered a Graded performer, and his handicap form is strong, so his outing this weekend is to probably find answers as to which route connections should take with him this season.

A strong pace over two miles suits him, and he won twice at Cheltenham last season, so clearly relishes the track plus the ease in the ground conditions is a positive.

A talented but quirky individual who won two novice hurdles, including a Grade Two, at Cheltenham last season before he was sent off a fancied contender in the Grade One Challow Novices’ Hurdle where he ran out at the fifth obstacle.

He failed to land a blow on his next two outings, but had excuses on both occasions and made the perfect start to his chasing career at Chepstow this month when defeating the highly-regarded Threeunderthrufive, and Honest Vic.

He was understandably a bit novicey at a few of his fences and has his own style of getting from A to B, but it was a striking performance nonetheless, and the six-year-old is a best-priced 33-1 for the Festival Novices’ Chase at the Cheltenham Festival.

His rivals on Saturday have a bit to find on the ratings, and one would expect Kim Bailey’s charge to be stepped up in grade after this run. 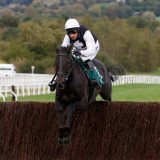 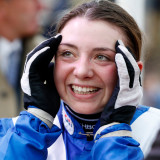