Click here to view the full Qatar Nassau Stakes racecard plus the best odds for each contender.

James Fanshawe is confident Audarya can handle testing conditions as she seeks her third Group One victory in the Qatar Nassau Stakes at Goodwood.

A Monday night storm saw the ground turn predominately heavy for the opening day of the Glorious fixture, but it improved to soft, good to soft in places by Wednesday morning, with the possibility of further showers throughout the week.

While Audarya’s Breeders’ Cup Filly & Mare Turf success last term came on firm ground, she previously won the Prix Jean Romanet on soft, so Fanshawe expects her to handle the conditions, whatever they are on Thursday, following an excellent second to Love in the Prince of Wales’s Stakes on her seasonal return last month.

He said: “Audarya ran really well at Royal Ascot and she’s come out of the race in good form. Six weeks is a nice gap between races when you are taking things step by step, and we’ve had this race in mind for a while.

“She’s got better as she’s got older, and she’s doing everything right at home. It was fast ground at Keeneland and Royal Ascot, but she shouldn’t have any problem on easier going because it was very testing last year when she won the Romanet, and very soft when she ran so well in the Prix de l’Opera.”

William Jarvis will be trying to end a long wait for a Group One victory as he sends out Lady Bowthorpe, with his last top-level victory coming with Grand Lodge back in 1994.

Winner of the Dahlia Stakes at the start of the year, the five-year-old has since finished second in the Lockinge and at Royal Ascot, before enduring a luckless run when fourth in the Falmouth Stakes this month.

She too has shown an ability to handle contrasting conditions, winning on quick ground at Newmarket before her fine Newbury effort behind Palace Pier when there was some cut in the surface.

Jarvis said: “She’s grown up as a five-year-old mare and she’s much more amenable now.

“As a three and four-year-old, we thought she was very much a soft-ground filly. But her run in both the Dahlia Stakes at Newmarket and more recently in the Falmouth Stakes were on good to firm ground, and I think she’s pretty adaptable.

“She was very tired when she came out of the Lockinge Stakes, but we had a very good preparation between Ascot and Newmarket, and she’s really been pleasing me since the Falmouth.”

Kieren Shoemark again teams up with the Nathaniel mare as she tackles 10 furlongs for the first time.

He added: “Lady Bowthorpe has taken me to some big races this year, and she’s run some massive races in Group Ones since giving me that first Group Two in the Dahlia.

“I feel she deserves a Group One and I’m really excited about her stepping up to a mile and a quarter. She’s by Nathaniel, and they usually stay fairly well, but she’s not short of pace – which you have to have at Goodwood, because it’s a trappy track. I really think it will suit her.”

Reflecting on her troubled passage in the Falmouth, Shoemark said: “I was happy with my position for about 50 yards! We started off in two groups, and she was nice and relaxed in a lovely position – then all of a sudden the groups merged, and she had a wall of horses in front of her.

“At crucial times when I needed to get her quickening there was nothing doing in front of me, so I decided to switch outside. I lost a couple of lengths in doing so, but she flew home and was beaten only a length. It’s hard to say if she’d have beaten Snow Lantern, but she’d have been second in a couple more strides.”

Aidan O’Brien fields two of the six contenders, with impressive Prix de Diane winner Joan Of Arc and Irish 1,000 Guineas winner Empress Josephine going for gold again in a race which is part of the Qipco British Champions Series.

The latter finished a short head in front of her stablemate when winning the Curragh Classic, but has since disappointed in the Coronation Stakes at Ascot and will be moving up in trip.

O’Brien said: “We are lucky to have some great fillies and we try to keep them apart and give them their best chance by picking the races which will suit them best, but we have been aiming both of these fillies for this race.

“Joan Of Arc won the Prix de Diane and has been progressing lovely all season. Empress Josephine will be stepping up to a mile and a quarter.

“We went further with her in Gowran before she won the Guineas, and then went back in trip.

“Maybe it was the ground and because it was early in the season (reason why she was beaten at Gowran) – it’s possible that we might have got a false read from it.

“It’s possible she could leave that Gowran run behind her and get the trip, but she is a filly that’s got plenty of speed.”

The line-up is completed by Zeyaadah and the Martyn Meade-trained Technique, who were separated by just a head in an all-weather Group Three at Newcastle last month.

Zeyaadah was well beaten in testing ground when fancied for the Cazoo Oaks, so the Goodwood conditions might not be totally ideal.

Her trainer Roger Varian said: “She’ll need to step up on the Newcastle form to win a Nassau – but while she only won a head, she was in command at the line there.

“Bar the Oaks, she’s done nothing wrong in her career. There was only one winner that day, and the rest were nowhere.

“I think she’s a 10-furlong filly, and I also think she’s a better-ground filly now she’s going up against better horses although she’s got soft ground form. She’s in good form, and I think she’s ready for this test.” 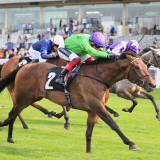