Fakir D’oudairies seized the opportunity to go one better than last season and claim an incident-packed renewal of Horse & Jockey Hotel Chase at Thurles.

Joseph O’Brien’s gelding finished second behind Allaho last term and was the 7-4 favourite on his return to the track under JJ Slevin.

In the Grade Two he travelled prominently but tailed the strong-finishing Haut En Couleurs and French Dynamite turning into the home straight.

The former looked have the race under control – but a final-flight fall ended his hopes while French Dynamite made a serious mistake behind him.

Fakir D’oudairies then swept through to take up the lead and crossed the line six lengths ahead.

Chacun Pour Soi had moved with promise for a long way, before dropping away quite tamely.

"He got a little lost around the turn and was galloping down the straight but obviously the horse in front fell, although we were coming for a challenge anyway," O'Brien said.

"I was very pleased with the performance and pleased with how he jumped and it sets him up nicely for the spring. He was giving away weight and I feel as he is getting older, it is taking a bit more work to get him there.

"He is a young horse and over his career has been fantastic and always runs his race. He tries and is a great horse to have in the yard. Today's race was a good one, they went a good gallop and it was a deep field so I'm very pleased.

"He will potentially go back to Ascot for the Grade One he won last year (Ascot Chase) and then we'll look at the Ryanair Chase and Aintree. I suppose all those options will be left open."

Cheltenham to inspect at noon on Friday for Trials Day 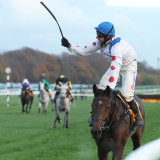 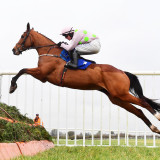 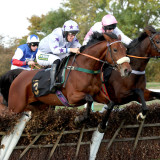