Prolific mare Enbihaar will face seven rivals on her return to action in the Princess Of Wales’s Tattersalls Stakes at Newmarket on Thursday.

John Gosden’s charge won four of her six starts in 2019 – winning three times at Group Two level with victories in the Lancashire Oaks at Haydock, the Lillie Langtry at Goodwood and the Park Hill at Doncaster.

She came up a little short when stepped up to Group One level for the Prix de Royallieu at ParisLongchamp in October – and has been kept in training as a result, in the hope of breaking her top level duck as a five-year-old.

Enbihaar is one of three mares in contention for the Group Two feature, along with Ralph Beckett’s Antonia De Vega and Dame Malliot from Ed Vaughan’s yard.

Group Two honours are also up for grabs in the Tattersalls July Stakes, for which 10 juveniles have stood their ground.

The two at the top of the market are the Johnston-trained Qaader – runner-up to 150-1 shot Nando Parrado in the Coventry Stakes at Royal Ascot – and Balding’s Windsor Castle scorer, Tactical.

There are eight runners declared for the Group Three Bahrain Trophy – a recognised trial for the St Leger at Doncaster in September.

Al Aasy is stepped up in class by Haggas after a 10-length demolition job in a Newmarket novice event, while Appleby’s Al Dabaran holds strong claims judged on his third placed finish behind subsequent Irish Derby winner Santiago in the Queen’s Vase.

O’Brien’s Dawn Rising and Gosden’s filly Miss Yoda are others of note. Scoop 6 selections: Be awake to Sleeping Lion's chances
Guineas hero Kameko could head to Australia at the end of the year 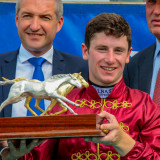 Media creating an “issue out of nothing” over interference, says Murphy 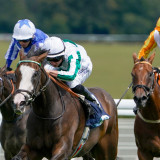 Scoop 6 selections: Be awake to Sleeping Lion's chances
Guineas hero Kameko could head to Australia at the end of the year

Media creating an “issue out of nothing” over interference, says Murphy
Betslip
JoinLogin
DepositLogout