Read what connections have to say ahead of what promises to be a fabulous feature at Sandown on Sunday. Watch the big race live on Racing TV.

The Enable story: We caught up with the mare and her connections before she ran in the Arc in the autumn

Connections of the world’s highest-rated horse, Enable, have warned she that she may not be at her peak for her eagerly anticipated clash with Ghaiyyath in what promises to be a compelling Coral-Eclipse at Sandown on Sunday.

The mile-and-a-quarter showpiece is restricted to four-years-old and upwards this year and has also attracted three more Group One winners in Japan, Magic Wand and the Japanese-trained mare Deirdre. Two other pattern winners, Regal Reality and Bangkok, complete the fabulous seven-runner line-up.

Ten-time Group 1 winner Enable won last year’s Coral-Eclipse in fluent style and will be seeking to add another chapter to her remarkable success story as no filly or mare has previously won two renewals of the race. In addition, the last six-year-old to win was in 1886, the year the race was first run.

The daughter of 2012 Eclipse winner Nathaniel, who has an official rating of 128, has won her connections more than £10 million in prize-money. She is unbeaten on British soil for more than three years (eight races during that time) but John Gosden, her trainer, seeking a fifth Coral-Eclipse win since 2012, has given warning that he expects her to benefit from the run.

“It’s no secret her main target this season is the Prix de l’Arc de Triomphe again, she came so close last year," Teddy Grimthorpe, racing manager for Prince Khalid Abduallah said. "Everything she does before that will be building up to Paris.”

“John has made no secret that the older she gets, it just takes that little bit longer to get her fit, there’s no question about that. We’re looking forward to seeing her again.”

The fitness of Ghaiyyath, rated just 2lb inferior to her, is assured as he has already been in sparkling form this year.

The Charlie Appleby-trained five-year-old, renowned for his exuberant front-running style, won the Dubai Millennium Stakes by a wide margin at Meydan in February and galloped his rivals into submission in the Hurworth Bloodstock Coronation Cup in a course record time at Newmarket last month. That race, like the Eclipse, forms part of the Qipco British Champions Series,

His exploits last year included a remarkable 14-length success in the Longines Grosser Preis von Baden in Germany. Few Group 1 races are ever won by such a distance.

Appleby said: “I think we can quite confidently state that it’s the race of the season so far. You’ve got two of the highest-rated horses in the world and the others are certainly no mugs. It’s going to be a great race and it’s no wonder everyone is looking forward to it.

“Enable’s the most wonderful racemare and we’ve all got her to beat. I’m sure John [Gosden] has an autumn campaign very much as his goal but we are always going to treat her with the utmost respect.

Angus McNae was excited by Ghaiyyath's sectionals in the Coronation Cup

“The plan has always been to head straight to the Eclipse after the Coronation Cup and we are comfortable dropping back to ten furlongs with him.

“If you could have stopped the race two furlongs out at Newmarket you would have been a lot more comfortable than going into the last furlong, where we were waiting for something to attack. Two furlongs out he was still travelling very powerfully when everything else was having to start making their move.

“Everyone has seen what he can do in the past but it’s been in Germany, France and Dubai, whereas last time it was the first occasion in England he’s put up a performance like that. I think everybody sat back and said ‘wow, he’s a serious racehorse’. I’m pleased for him more than anything because he’s just as generous and enthusiastic at home and we’ve always known he’s got that big engine.

“The depth of the Coronation Cup meant what he did was very much respected. I know it was a different ball game, trip wise, but to see Stradivarius [third in the Coronation Cup] try and make that mid-race move on him showed the calibre of race we were dealing with. What he did in the Gold Cup afterwards puts the race into perspective.”

Ghaiyyath has always looked invincible when fresh but hasn’t produced his best on a couple of occasions, including when finishing 10th of 12 in last year’s Qatar Prix de l’Arc de Triomphe after his runaway win in Germany.

Appleby said: “He’s put up big performances in the past and not always backed them up but, as a five-year-old, we are dealing with a different animal. We’ve got the finished article and all the post-race signs since the Coronation Cup have been good. 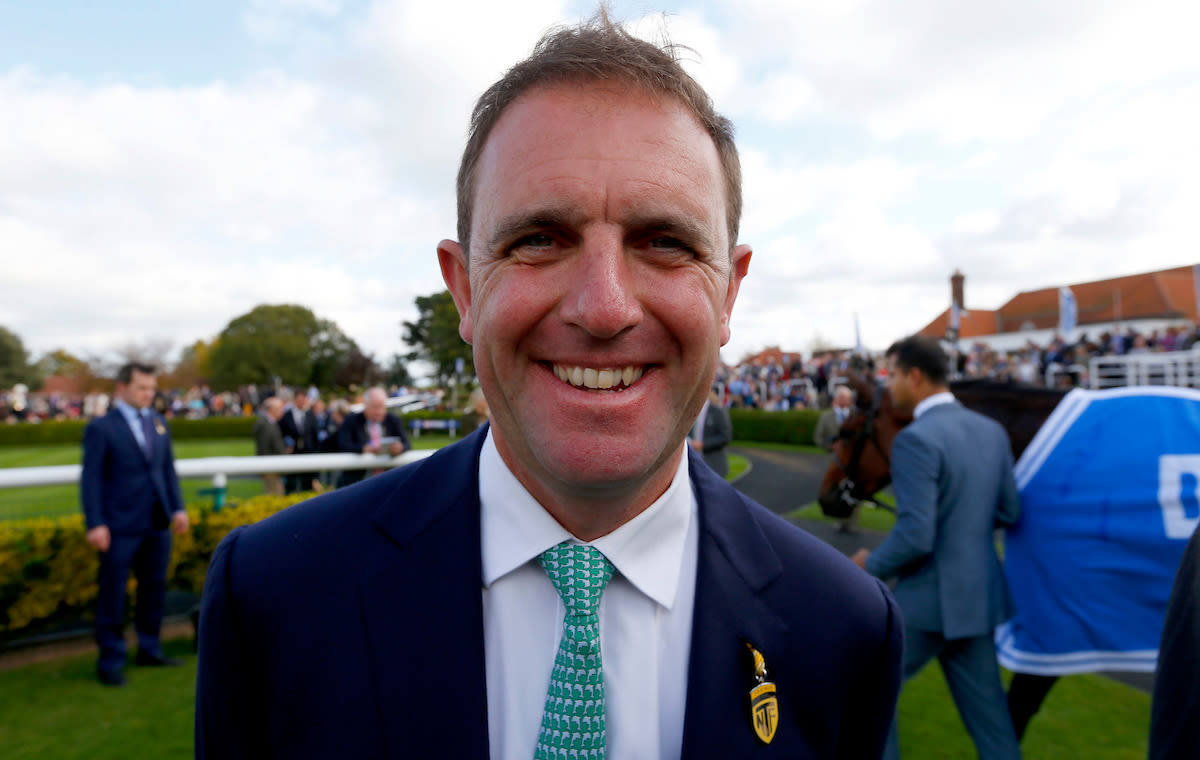 “After his races this year he’s gone straight back to his feed pot and got straight back to routine exercise whereas before the Arc we had to do our best to freshen him up. That has really been the only race where he has not performed but I put that down to a couple of things – his previous big performance in Germany, soft ground and a testing race.”

Asked about his exuberant style of racing, the trainer, seeking a second Coral-Eclipse after the victory of Hawkbill in 2016, said: “He’s got a long stride and it’s a matter of letting him get into a comfortable rhythm. He’s had a lead in the past but the others can only do it for so long as they are just not quick enough.”

Aidan O’Brien is chasing a record-equalling sixth Coral-Eclipse triumph but has been out of luck in the race since So You Think won the 2011 renewal. He has been responsible for the runner-up on four occasions since then, including last year with Magical.

Japan’s exploits last summer included winning the Juddmonte Grand Prix de Paris at Longchamp plus the Juddmonte International at York. He signed off the year with a fine fourth in the Prix de l’Arc de Triomphe and filled the same position in the Prince of Wales’s Stakes at Royal Ascot last month after a slow start.

“What happened to Japan at Ascot was Ryan (Moore) was waiting on the stalls to open and when the starter shouted ‘hoods off’ he jumped and hit the stalls, so when the stalls did open he was on the back foot and lost a little bit of ground,” O’Brien said.

“Ryan then let him go forward but he did that when the pace was strong, it was his first run and the combination of all that he got a little bit tired in the last furlong, but Ryan was very happy with him.

“The plan was always to come here if he was fine and we think he’ll come forward again, so we’re looking forward to it. In an ideal world you might want a little more time, but it’s not an ideal world.”

Magic Wand has been all over the world flying the flag for Ballydoyle and O’Brien believes the mare thrives on racing.

“Magic Wand is in good form, we need to keep finding her races to keep her ticking along and then when something really suits her she can run a very good race,” O’Brien said.

On Enable, he said: “It’s great that Enable is still racing, good for the public. There’s always pressure and risk, racing a filly like that, she’s six now. We think a horse keeps improving through three, four and five and then when a horse comes to six, you try to keep them safe. It’s great they’ve decided to keep racing her.”

The Verdict: How good was Deirdre in the Nassau?

Deirdre became only the second horse trained in Japan to win a Group One race in Britain when scooping the Qatar Nassau Stakes at Goodwood last summer under Oisin Murphy. The champion jockey retains the ride on the six-year-old, a regular sight on the gallops at Newmarket who is trained by Mitsuru Hashida.

She will be ridden by champion jockey Oisin Murphy said in his blog on his website: “She’s in a great routine at present and we’re very happy with her.

“Obviously it’s a hugely competitive race with Enable and Ghaiyyath in there, it’s a brilliant race, it doesn’t get much better really, but she’s in grand form and I’m expecting her to run well.”

Sir Michael Stoute is the only trainer to have had six outright winners of the Eclipse (Alec Taylor Jr’s haul included a dead-heat) and he relies on Regal Reality, not beaten far when third in last year’s renewal.

Bangkok won the Group Three bet365 Classic Trial at Sandown last year and chased home Japan in the King Edward VII Stakes at Royal Ascot a couple of months later. On his latest start he made much of the running in the Prince of Wales’s Stakes before fading to finish fifth.

Andrew Balding, his trainer, said: “It’s not easy making all the running around there and he gave it a good stab. He’s a high-class horse on his day but a victim of having won a Listed race [this year] and there aren’t a huge amount of options for him without having to carry a penalty in a Listed race.”