Enable entered the history books at Ascot on Saturday with a stunning victory in the King George VI and Queen Elizabeth Stakes. Read our report and listen to John Gosden's interview below. By Geoffrey Riddle at Ascot

When John Gosden called Frankie Dettori on Sunday to tell him that Enable would run in Saturday’s King George VI and Queen Elizabeth Stakes the Italian jockey didn’t know whether to laugh or cry.

On the plus side Enable was going to line up in the £1,150,000 contest with a favourite’s chance. On the negative side he knew he would have to lose 7lb in six days.

From famine to feast.

As Enable powered through the driving rain to cross the line four and a half lengths clear of Jim Crowley and Ulysses her jockey punched the air in jubilation. He then blew a kiss to the crowd huddled in the grandstand. Having completed his customary flying dismount the 46-year-old rider then sealed his fifth triumph in Britain's midsummer highlight with another kiss on Enable's nose.

Dettori has eaten little more than fruit, fish and water this week. He did not look gaunt, but on the back of his shoulder injury that ruled him out of Royal Ascot it has been a lean month but Enable is now no better than 9-4 with Betfair to win the Prix de l’Arc de Triomphe in October and as short as 7-4 in places. Suddenly the world is a more beautiful place for Dettori.

“She destroyed them,” he said, sucking a boiled sweet afterwards.

“She is uncomplicated and has a good mind.

“I haven’t had a feeling like that since Golden Horn. She is very good.

“I’ve been on water and fish, basically. It’s boring but I wouldn’t let anybody else ride her. I am most looking forward to a glass of champagne later!

“I had a week to do it and had plenty of time to pace myself. I stuck to a strict regime. All of those days of not eating have paid off. I could do with a good burger now!”

“The doctor said three months and I came back in five weeks. That is the key, You need something to drive you. All the credit goes to Enable, she is a superstar.”

Enable became the first horse to add the King George to the English and Irish Oaks and handed Gosden his third winner after Taghrooda in 2014 and Nathaniel, Enable's sire, in 2011.

Enable has now won on a Tapeta surface, good to firm, and good to soft going throughout her six-race career. She has yet to travel outside Europe, but is the 3-1 with Bet365 for the Breeders' Cup Turf in November at Del Mar, for which she qualifies automatically as a result of the Breeders' Cup Challenge Series.

"The facts show she can do it on any ground,” he said.

John Gosden on Enable after the 2017 King George

"All in all she's as good a filly as I've ever trained - Taghrooda was brilliant to win this and she's following Dahlia and Pawneese.

"I've always planned the Yorkshire Oaks, then pause, stop and think - no trials and then possibly the Arc."

Gosden also had praise for his rider.

“His passion and hunger for the game is as great as ever,” he added. “He’s gone from a fractured shoulder, missing two Group Ones at Royal Ascot and he has fought hard and has had a lonely battle.

“He’s been on white fish and water for ten days and I think that is impressive because he is not a spring chicken anymore. He wanted to ride her in Ireland, and he wasn’t 100 per cent there.”

This was the second time that Enable had to battle the elements. Just as she had done at Epsom when she was an impressive winner of the Oaks, she had to face the rain, which put the skids on any challenge from her main adversary, Highland Reel, from the outset.

Graham Lee bustled up Coolmore’s best-laid plans by acting as pacemaker on the inner rail aboard Enable's stable companion Maverick Wave, who broke from stall ten. Ryan Moore was forced to race wide either in search of better ground or to cajole Highland Reel in to believing he was racing on his own, while Enable was sent in pursuit of the pacemaker. Jack Hobbs and William Buick stalked Highland Reel, while Ulyssees was held up.

As Maverick Wave entered the home turn Dettori and Buick both quickened the tempo and coming in to the straight the pair were locked in to an embrace in the lead. Jack Hobbs emptied out almost immediately, however, and two furlongs from home Enable was left in front before going on to justify her 5-4 favouritism.

Enable is owned by Prince Khalid Abdullah of Saudi Arabia, who also races Arrogate, the world’s highest-rated horse, in his Juddmonte silks.

It has been a stellar few years for his racing operation with the likes of Kingman in 2014 and Frankel in 2011 and 2012 but this will be the first time since the six-time Group One winner Midday that he has had a genuinely top-class filly.

The fact was not lost on his son, Prince Ahmed bin Khalid, for who it was an emotional success.

“This filly was very impressive, I think she’s as good a filly as we’ve had.

“I promised my father I would bring him back the cup. I’m pleased she didn’t make a liar of me.” 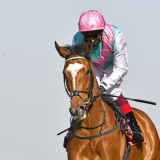