Enable will face six rivals in a mouthwatering renewal of the Coral-Eclipse at Sandown on Sunday.

John Gosden’s superstar is back in training for a fifth season after narrowly missing out in her bid for a record-breaking third win in the Prix de l’Arc de Triomphe last October.

Enable won the 10-furlong Group One first time out last term, beating Magical, and she faces another stiff task this time, although no three-year-olds are permitted this year.

Heading the opposition is Charlie Appleby’s Ghaiyyath, who broke the track record in the rearranged Coronation Cup at Newmarket, leaving last year’s Derby winner Anthony Van Dyck and Stradivarius in his wake.

Aidan O’Brien sends Japan, winner of last year’s Grand Prix de Paris and Juddmonte International, who finished fourth behind Lord North in the Prince of Wales’s Stakes on his return to action.

Joining him is globetrotting stablemate Magic Wand, who has competed with credit in America, Australia, Hong Kong and Saudi Arabia.

A third top-class mare in the race is the Japanese star Deirdre, winner of the Nassau Stakes last season.

She has been prepared in Newmarket once more and will be ridden by champion jockey Oisin Murphy again. 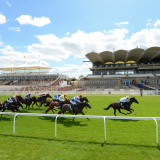