Paul Nicholls fires a twin assault on the Betfair Tingle Creek Chase on Saturday in a bid to add to his record haul of 10 triumphs in the race.

The 2017 winner Politologue, who landed the Champion Chase when last seen, will be joined by recent Haldon Gold Cup hero Greaneteen. Their task was made more straightforward on Friday night when Altior, the odds-on favourite, was ruled out.

Politologue carries the colours of John Hales, who said: “I’m sure he’ll give his best, as he always does.

“Politologue is in good condition, and I think you’ll find that he’s been well prepared for the race – there’ll be no excuses if we don’t win.

“He obviously won the race a few years ago, and bled in the race last year, but Paul devised a new way of training him after that – which paid off at the Festival.”

Nicholls told Betfair: “Greaneteen won the Haldon Gold Cup in determined style at Exeter, staying on stoutly. Although he has earned a crack at this Grade One and has come on bundles since Exeter, he does need to improve – because Politologue is rated 10lb higher than him.

“Greaneteen is what I call a strong-staying two miler, which is what you want for a race like this, and it wouldn’t surprise me to see him right in the mix.

“We know Politologue is best fresh – he looks stunning, has had an away day and couldn’t be in better shape.

“The more it rains at Sandown, the more it will suit him.”

Harry Whittington is still intending to step Rouge Vif up in class, after he impressed in handicap company at Cheltenham in October, but will check on ground conditions before confirming his participation.

He said: “I’m just hoping there’s some good to soft in the going description – if there’s more rain and it turns soft, then I think we’ll probably be a non-runner.

“He’s in great form, and his preparation has gone very well. He was ready to run in the Shloer Chase at Cheltenham last month, and we pulled him out of that because of the soft ground.

“If we do run, hopefully he’ll run a big race. It’s very tough, but he’s earned his right to have a go – and hopefully he can show he can mix it with the big boys.”

Fahy said: “Everything has gone well since Navan. I couldn’t be happier with the horse – I’ve never seen him as well in himself.

“He’s an outsider, which is great – that’s the way I always triumph. As long as the horse is well, that’s all you need to worry about.

“It’s going to be an enjoyable day for us. He’s entitled to go, and we’re looking forward to it.” 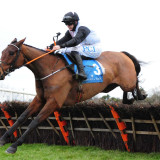