Click here to listen to our new podcast, On The Wire, hosted by Johnny and Brendan Duke.

I trust that the On The Wire podcast has pointed you in the way of a winner or two so far, with more to follow.

Nine runners in the John Durkan, with a load of Grade Ones between them, means a vintage renewal is in store.

Trained by the excellent Liam Cusack, he was well-backed in what looked a weak maiden earlier this year in which neither he nor Darver Star managed to land a gamble. He is intriguing here.

He was a shorter price to win the Gold Cup at Cheltenham in March than he is for this. Granted the trip is short of his best and the stable has not had a winner all season but the price compensates. He seems to be in good nick at home and is more than capable of winning this.

Given the pedigree, Goodbye Someday has not exactly set the world ablaze, but he might fire belatedly here. He is in top hands and his fourth in a Clonmel maiden in October entitles him to go close.

A weak type last season, he ran a blinder at the Punchestown Festival, and looks another nice prospect by Fame And Glory. He rates he value-bet of the weekend.

This Yeats-bred is of clear interest on his maiden form and she can surely better a mark of 91 at some stage. This isn't much of a race.

Who knew JP McManus was a Paul Simon fan? This horse has plenty of ability and should surely win a maiden hurdle at worst. He made an excellent return at Naas and may have enough about him to beat Longhouse Poet in a strong maiden.

This is not an easy horse to assess but he is rated 12lb lower over hurdles, with Richie Deegan claiming into the bargain. He has won three of his seven starts over hurdles – and. finished five lengths behind Belshill as a novice when still with Sandra Hughes - and now might be the time to catch him.

Glenloe probably should have beaten Delta Work in the 2018 Pertemps Final but he races off 135 here and can exploit that. His mark seems pretty fair to judge by his chase efforts and Mark Walsh takes the ride here.

Click here to listen to our new podcast, On The Wire, hosted by Johnny and Brendan Duke. 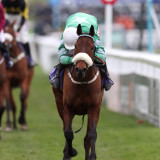