Who wins the Duke Of York Clipper Logistic Stakes on Wednesday? Harry Allwood puts the six-furlong contest under the microscope and makes a case for a 4-1 chance.

The 2021 Dante Festival gets underway on Racing TV on Wednesday, and we have a brilliant three days of racing action to look forward to on the Knavesmire.

This year’s renewal of the Duke Of York Clipper Logistic Stakes, the feature contest on day one, looks a strong one on paper, and is sure to reveal some clues for the Group One sprints later in the season.

The ground is likely to be a big factor in the result as, at the time of writing, the going is officially described as good, good soft in places. However, I expect that will change ahead of racing on Wednesday as there is plenty of rain forecast on Tuesday evening.

The betting is headed, albeit narrowly, by Art Power who showed some strong form on soft ground last year, and further improvement can be expected from the four-year-old as his trainer, Tim Easterby, said his charge still had some growing to do last season and was not the finished article.

His only blip last year came in the Nunthorpe at this track, but five furlongs on good ground didn’t suit him on that occasion, and he proved he is a Group One performer on his final two efforts over six furlongs. However, Easterby has said the Diamond Jubilee is his main target, and he might just need the run here with it being a prep run ahead of Royal Ascot.

Starman is yet to prove he is a Group performer, but he looked a high-class colt in the making when winning a Listed contest over this course and distance last year, and his run in the Champions Sprint can be excused given the ground was against him.

The rain has to be a worry here though, and he will surely struggle to show his best if the ground becomes soft.

Summerghand is thriving and, with the likelihood of a fast pace, should have this race run to suit. He also has race fitness on his side, and he has run well on soft ground in the past.

However, the contender who looks worth siding with is OXTED who was a shade disappointing when beaten by Summerghand last time out, but there is every reason to believe he will reverse form here.

Roger Teal’s stable star developed into a top-class performer last year, with his victory in the July Cup one of the strongest pieces of form on offer.

Although he finished behind Brando and Art Power in the Champions Sprint on his final start last season, he was still in front half a furlong from home, and the lack of a recent run, and with it being his first outing since a wind op, probably took its toll in the closing stages.

I am happy to forgive his run at Riyadh where he possibly wasn’t suited by the dirt, and a wide draw was also against him.

Although he was turned over at odds-on last time out, I do think there were positives to take from it. He travelled like the best horse in the race, and Teal said he had not given his five-year-old much work since his run in Riyadh, and he should be sharper this time.

He also raced exuberantly at HQ, which did not help his cause late on.

He is the one to beat on ratings, and it will be disappointing if he does not go close on Wedneseday, with this track likely to play to his strengths. 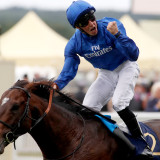