Highest Ground impresses at Haydock but Derby may come "too soon"

Highest Ground looked a smart colt in the making when overturning the odds-on Waldkonig in the Racecourse Live Streams On Racing TV Novice Stakes at Haydock.

The Sir Michael Stoute-trained son of Frankel stepped up in some style on the Leicester success which came on his only run as a two-year-old nine months ago.

Waldkonig had race fitness on his side, having finished third in the Listed Newmarket Stakes at headquarters, but Highest Ground proved well up to the task to remain unbeaten.

The favourite was quickly away and shared the early pace with Screeching Dragon, before taking a definite advantage fully six furlongs from home.

Ryan Moore matched the move by taking Highest Ground into second place and poised to make his challenge in the straight.

Hitting the front over two furlongs out, Highest Ground (13-8) drew away from the 4-9 shot in the final furlong to win by two and a half lengths. The two protagonists pulled 11 lengths clear of Mersin in third.

Alan Cooper, racing manager for owners, the Niarchos Family, said: “His return to competition has been delayed until today, and he’s done it very nicely. Everyone’s patience and care of the horse has been rewarded.

Highest Ground was cut to 14-1 from 25-1 for the Investec Derby with Betfair and Paddy Power, and to 16-1 with Betway, but Cooper’s initial instinct was that the Epsom Classic on July 4 may be too quick a turnaround.

He added: “I’d have thought the Derby might be too soon – but let’s have a chance to speak with Sir Michael. I think the Derby is too soon in 10 days.

“I think the trip today was ideal. Let’s get the horse home and see what Sir Michael would like to do.”

The 2020 Investec Derby: Runner-by-runner guide to the 16 contenders 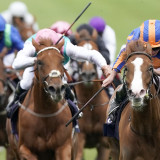