Denman's amazing career to be remembered with new gates at Newbury

Denman, the only horse since Arkle to win two runnings of the Hennessy Gold Cup, is to be permanently remembered at Newbury Racecourse by a specially-commissioned set of iron gates named in his honour.

The memorial to the legendary chaser will stand at the North Entrance and will be officially opened ahead of racing on Friday 29 November, the first day of the Ladbrokes Winter Carnival.

They will be opened to racegoers by connections including Paul Barber, Harry Findlay, Paul Nicholls, Ruby Walsh and Sam Thomas, as well as others closely associated with Denman.

And here they are - the gates named in honour of the mighty Denman! 🐎 pic.twitter.com/0dTEMz9QrW

Denman emulated Arkle by winning the Hennessy Gold Cup, now the Ladbrokes Trophy, in 2007 and 2009, with this year marking the 10th anniversary of his second win in the race.

In recording his second victory, which followed a spell out of training due to a heart condition, he produced one of the most memorable performances of the modern era by winning from what had seemed an insuperable handicap mark of 174.

Popularly known as ‘The Tank’, Denman was owned by Paul Barber and the late Margaret Findlay and trained by Paul Nicholls. He also won the Cheltenham Gold Cup in 2008, defeating stablemate and rival Kauto Star.

The new gates have been designed and made in collaboration by talented equine sculptor Charlie Langton and celebrated local blacksmith Guy Clarkson.

Denman's part-owner Paul Barber said: “I am touched that Newbury Racecourse has chosen to permanently commemorate Denman in such a fitting way. Put simply, he was a horse of lifetime.”

Harry Findlay, such a big part of the Denman story, added: “This is a fitting tribute for the immortal equine Tank! National Hunt racing has the most educated support in the world and the knowledgeable rapport and banter with the punters after his two Hennessy wins at Newbury were something I will never forget.

"Denman more than left his mark on Newbury and his first win in 2007 showed just how special he really was!” 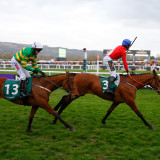