Gordon Elliott is happy to let Delta Work clash with his new stable companion Presenting Percy in the Ladbrokes Champion Chase at Down Royal.

Delta Work finished a disappointing fourth in the first Grade One of the Irish National Hunt season last term, but raised his game to complete a top-level double with victories in the Savills Chase and the Irish Gold Cup at Leopardstown.

The Gigginstown House Stud-owned gelding rounded off his campaign by finishing fifth in the Cheltenham Gold Cup, and Elliott hopes he can find the necessary improvement to go even closer in the blue riband next March.

“To be only be beaten six lengths in the Gold Cup, with the way he jumped, I thought was very good,” said the Cullentra handler.

“He’s only seven, so he’s still a young horse – and I haven’t given up on him yet. If his jumping brushes up, he’s in the mix.”

Presenting Percy has never quite looked the same horse since his stunning display in the RSA Chase at the 2018 Cheltenham Festival.

Not too far behind Delta Work in both races at Leopardstown last season, however, the nine-year-old was making late headway when falling two fences from home in the Gold Cup at Cheltenham – and has since joined Elliott from Pat Kelly’s yard.

Elliott will train Presenting Percy for the Gold Cup, but also views him as a live Randox Health Grand National contender.

“The race at Down Royal (on Ocotber 31) is a Grade One, so I’d have no problem running the two of them – and I could run two or three more with them,” he added.

“Presenting Percy is a horse I’ve always looked up to and said ‘he’s a horse you’d love to have’. I’m very lucky to have him.

“He probably has to improve half a stone to be a Gold Cup horse, but he ran well in a couple of those races in Leopardstown last year and was running a good race in the Gold Cup when he came down."

Speaking to the media via Zoom, in a call aranged by Horse Racing Ireland, he added: “To me, he has Grand National written all over him. He’s a good jumper who has a bit of class.

“I’d love to win a Gold Cup with him – but if that didn’t happen, the Grand National is in the back of my head.”

The 10-year-old holds an entry on the Flat at Navan on Thursday, but appears unlikely to take up the engagement.

Elliott said: “I stuck him in just to keep my options open, but I don’t know if I’ll run him.

“If the ground is good up in Down Royal I’d run him in the big race (Ladbrokes Champion Chase) there as well – if not I might keep him for the Boyne Hurdle in Navan.

“He’s in great form, and has been the horse of a lifetime. If everything goes well, we’ll dream about going back to Aintree this season.”

On the pulling power of Tiger Roll, he added: "Whenever anyone comes to the yard, he's always the first horse they want to see. He's the horse of a lifetime."

Three other Elliott stars set to reappear at Down Royal are Envoi Allen, Abacadabras and Samcro.

Envoi Allen is due to make his debut over fences at the Lisburn circuit; Champion Hurdle aspirant Abacadabras is pencilled in to contest the WKD Hurdle, and Samcro is bound for a Grade Two chase for second-season novices.

Elliott said of Envoi Allen: “He was bought to be a Gold Cup horse, and that’s the way we’re going to train him.

“He doesn’t do anything flashy at home – he’s just the real thing when he gets on to the track.

Abacadabras was last seen going down by just a short head to Nicky Henderson’s Shishkin in the Supreme Novices’ Hurdle, while Samcro bounced back to his best to beat the Willie Mullins-trained pair of Melon and Faugheen in a titanic tussle for the Marsh Novices’ Chase.

“Samcro is a very good horse, and I’ve been lucky to have him.

“Everyone says him winning at Cheltenham was a great training feat, and it was grand – but for me, running him in Limerick on that heavy ground at Christmas (when second to Faugheen) was a terrible training decision.

“I’m not going to make that mistake this year – if there’s heavy in the going, he won’t run.

“I’d say he’ll go to Down Royal, then the John Durkan, the Kinloch Brae and then the Ryanair Chase in Cheltenham. He’ll probably have an entry in the King George as well, but that’s what I have in my head at the moment.”

When asked what his one wish would be for the 2020/21 National Hunt season, Elliott did not hesitate in saying: “To be champion trainer. It was heart-breaking to get beat by Willie in the final week of the season at Punchestown in 2018 and in 2019 – we just got beat as well. Hopefully it’ll happen some day, and if it ever does I’ll really appreciate it.

“We’re very lucky to have the amount of horses we have – hopefully we can keep them in one piece and have a good season.” 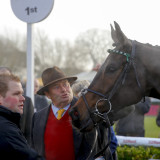 Altior in the Betfair Tingle Creek: Five reasons why he will win and five why he won't
Min on course to bid for John Durkan hat-trick at Punchestown
Whittington hoping rain stays away for Rouge Vif Tingle Creek challenge
Potters Corner to miss Chepstow in favour of cross country campaign
News Articles

Altior in the Betfair Tingle Creek: Five reasons why he will win and five why he won't
Min on course to bid for John Durkan hat-trick at Punchestown
Whittington hoping rain stays away for Rouge Vif Tingle Creek challenge
Racing TV Extra Limerick
Betslip
JoinLogin
DepositLogout