I have bagged a quality card at Kempton for my return to the channel on Wednesday afternoon and hopefully I will be able to find at least one winner on the nine-race card.

I don’t know how much I will have left in the tank by the 0-60 that ends the action but I’m sweet on one in the opening contest, at 1pm, and like another pair later on.

1.00 Kempton: Lady Fanditha at 4-1 with BetVictor and William Hill

This filly has had more than a year off for but hopefully her fitness, relative to that of her rivals, will not be an issue.

She had a subsequent Listed winner behind when making a winning debut as favourite at Nottingham in decent style.

Watch how Lady Fanditha won on her debut

She subsequently went on to York for the Listed Marygate Stakes, where she went off fourth favourite in a quality 18-runner field, but never figured and has been absent since.

It is distinctly possible, in my view, that she will prove herself capable of much better than her initial rating of 72 suggests.

She is against a lot of well-raced fillies here, most of whom are unlikely to have massive improvement in them, so I am prepared to take the chance.

My confidence in her chances will be increased if she is well supported given that she was a well-backed winner on debut and strong in the market second time out.

3.20 Kempton: Oloroso at 9-2 with BetVictor and William Hill

Came close to ending a fairly long losing run at Kempton last time out in March and hopefully he will have been ticking over nicely since then.

It is possible that the four-year-old will be suited by an extended break since his last run came after a five-month absence and his only win came over this course and distance after a break.

He is only 1lb higher than for his latest effort and that puts him just above his winning mark and he has run well off higher in the past.

Oloroso also gets on very well with Joshua Bryan and the combination have plenty in their favour.

3.55 Kempton: Scentasia at 5-1 with Coral and Ladbrokes

John Gosden hit the ground running at Newcastle on Monday and I will be looking very much at reasons to be with his runners rather than against them in these early weeks, especially in the higher-grade races.

He runs Nazeef and Scentasia in this Listed contest and both are big players, but my preference is for the latter.

Scentasia was improving rapidly last autumn and has already won two big-field Listed events on the all-weather, whereas Nazeef has performed in handicaps.

She has also won over this distance and, given she is a couple of points bigger in early markets with Frankie Dettori on board, I am happy to be with her. 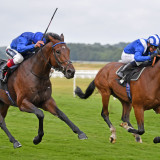 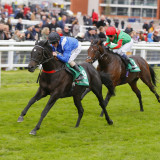