Dave Nevison's top tips for Tuesday: In-form Liamba can stay on a roll

There is no British racing on Racing TV on Tuesday but members have no fewer than 95 runners at Down Royal to sift through – not to mention three reserves!

I am heading to Southwell’s all-weather evening meeting for my first bets of the week, starting with:

There are few horses who win consecutive sprint handicaps at Southwell and only get penalised 2lb for each win but that is the case with David O’Meara’s five-year-old mare, who arrives here in cracking form.

She won from a similar draw last time and is kept to the same grade of handicap. I cannot see any negatives.

Wasntexpectingthat excels at Newcastle and is improving at a rate of knots on that surface. He makes his fibresand debut here but can continue the good run.

This is the best race he has contested but most of his rivals are exposed so I am expecting another win.

Wasntexpectingthat has been pushed up 8lb for his latest emphatic success but that is partly negated by Sean Davis, who just missed out on being champion apprentice last season, still being able to claim 3lb.

Looks to be running herself back into form at the same time as dropping back down to a mark she can handle.

She finished a close third here last time but has slipped another 1lb and is now just 3lb higher than when an emphatic winner here last spring. Sylviacliffs is also back into a 0-60 handicap, which is the level she last won in. She has also won in a higher grade.

Karl Burke and Ben Curtis are a potent combination at Southwell and I fancy Sylviacliffs will reverse recent form with Break The Silence and resume winning ways. 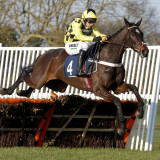