The Racing TV tipster has three selections for the action at Wetherby, which will be shown live on the channel on Thursday.

A pretty obvious selection in a low-grade handicap hurdle, but hard to oppose. A consistent horse who has been in very good form since rejoining Keith Dalgleish from Kenny Johnson, he has gone up 17lb since he started winning but deservedly so and the handicapper may have been generous leaving his mark at 98 for his effort last time.

Just as importantly, there appears little in any real form against him in this line-up and nothing looking likely to find the improvement needed to shake the selection up.

I must admit I am backing the trainer rather than the horse, to some extent with this one, who has not shown too much on his last couple of starts. However being by Black Sam Bellamy out of a dam that won over two miles on the Flat I expect improvement now stepped up in trip and Jennie Candlish is becoming one of the best at getting horses of modest ability to win off the right mark in handicaps.

Cosheston shaped like a stayer in bumpers, probably unsurprisingly, and has shown just enough ability over hurdles to suggest there are wins in him.

Another left on the same mark as last tim,e but it might well have been different had he stood up instead of falling four out over today’s course and distance.

Hollywoodien was definitely going best and although things often change during what can prove punishing home straight at Wetherby he looked certain to go very close to winning, at least.

This is a good race but he was a winner here off a similar mark before an enforced absence and looks to have at least retained that level of form - he could even still be an improver.

Tom Symonds has had a frustrating run of seconds, along with this faller recently, but I have no doubt the stable is in decent form so fortunes will definitely change soon if there is justice. 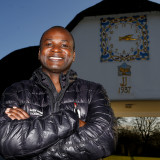