Click here to view the racecards for the final day of the Qatar Goodwood Festival.

The Saturday of the Qatar Goodwood Festival is always one comprising of tough-looking handicaps, but this year, both divisions of the Stewards’ Cup look to have obvious candidates.

I will be hoping to at least end this meeting in glorious style by having a decent each-way double and take advantage of the best extra-place terms. Don’t forget, every race from Goodwood on Saturday will be shown live on Racing TV, and the team will be previewing all the action from 11am on the channel, so make sure you tune in!

I watched this horse win the opening event of a quiet Saturday-evening card at Salisbury after finishing a shift in the Racing TV studio and wasn’t really expecting too much.

However, he ended up being one of the most impressive winners on a quality day of action, and this race became an obvious target afterwards.

It looks like he is simply a late-maturing type, as he is certainly bred to be useful, but seemed to only be capable of running in a modest grade over the past two seasons.

That has definitely changed massively after his latest win and he is with a trainer who excels with sprinters in Charlie Hills, and Jim Crowley certainly knows his way up the Goodwood straight!

A 12lb hike in the weights sounds a lot, but it’s likely he would still have won off his new rating last time out and it is hard to see anything amongst this field having the amount of improvement he has.

This four-year-old traded very short in running in the Wokingham at Royal Ascot having clearly been aimed at that major sprint, but probably hit the front too soon and after looking like winning on the bridle, he eventually got overhauled close home.

He was sent off a well-backed favourite for that event and showed the confidence was not misplaced in his abilities by bolting up at Newbury last time out and beat a decent field with ease.

He has been raised 7lb for that victory, but that looks lenient and although the competition is useful, it is largely the usual suspects in this big-field handicaps and Nahaarr has probably improved past them.

I thought this horse was a good thing for the finale at Goodwood on Tuesday, but he was a late non-runner, and I can only assume he is over whatever ailed him.

The basis for the confidence was the strength of the form he showed at Doncaster last time out when he finished second.

The form seems to be boosted by every runner from that event and it looks a key handicap. The 7f trip might suit him better than the mile he was due to run over on Tuesday and the tongue strap seems to have brought about sustained improvement, so he looks one to be with. 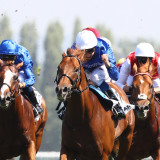