Dave Nevison: My tips for day two of the Dante Festival at York

The Dante Stakes is the pre-eminent British Derby trial and the highlight on a quality card from York live on Racing TV. Enjoy more live racing from Newmarket, Salisbury, Perth and Clonmel with dedicated coverage on Racing TV Extra.

The market for the Al Basti Equiworld Dubai Dante Stakes looks very much one based on reputation rather than substance - two very-lightly raced winners head the betting and Group Two winner Royal Patronage - who beat this year’s 2000 Guineas winner last term - available at double-figure odds!

I am looking to sit that race out but there are plenty of opportunities to have a bet in some good handicaps.

This sprinter is on a fantastic winning roll and might not have stopped yet.

He has improved 2st since last September and won five handicaps last autumn, while he struck on his latest start at Goodwood when typically travelling well before challenging and then asserting inside the final furlong. Raasel has been raised another 7lbs for that win but, while that may seem a lot for a narrow victory, I think that was a strong handicap and he beat another horse who may have aspirations for Group races later this year.

James Doyle has won on Raasel three times already so clearly knows him and, given the five-year-old is fresh at this time of year, it seems a good bet that he will continue to improve.

Nigel Tinkler has hit form in recent days and might pick up a big York handicap with this improving four-year-old.

Isla Kai rattled up a hat-trick last season, winning twice at Doncaster as well as Newbury and was only beaten just half a length over this course and distance at the Ebor meeting on his final start. He reappeared in the Spring Cup and was beaten less then a length into fourth at Newbury after being in the van throughout and it is easy to believe he might just have needed that run. Given the current form of the yard an improved performance may well be expected.

Isla Kai is described as a good physical specimen who is likely to progress this year by Timeform and that expectation certainly seemed to be backed up by his reappearance run. Very few rivals in this high-class handicap seem to have much improvement in them and he might be the one.

He has run two really good races over the Ebor distance at this course and on both occasions has looked as though he would win the race over two furlongs further. He gets his chance to excel with a test of stamina now and he looks set to take it.

Ravenscraig Castle reappeared at Ripon over this trip and ran well in a muddling race to finish third. He hasn’t been raised for that effort and assuming he has come on for it - which given his size seems most likely - he should now be spot on.

Ravenscraig Castle looks set to have a good season this year and hopefully a win here can set him on the road to the big staying handicaps coming up later in the campaign. 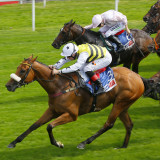