Darasso gets the better of Escaria Ten on informative Thurles card

Darasso was given a confident ride by Mark Walsh to win the Equuip Foal To RACE Transition Year Programme Chase at Thurles.

Trained by Joseph O’Brien, the nine-year-old was winning for the 12th time in his 39 races and was gaining some compensation for his near-miss in the Galway Plate when touched off by subsequent American Grand National winner Hewick.

A fair three-length third to Blue Lord in the Clonmel Oli Chase last time out, Walsh was happy to let Cilaos Emery and Escaria Ten get involved in a battle up front.

When he arrived travelling smoothly before the second-last the result looked a formality, but Escaria Ten made him pull out all the stops, eventually going down by two lengths to the 11-10 favourite.

Owner JP McManus’ racing manager Frank Berry said: “It was a lovely performance and he has been a great horse who turns up every day. The race was coming quick enough for him after Clonmel and Mark said they went a right good gallop and he picked up well.

“It was tight enough around here for him, it took a while to warm up into it and he was going as fast as he wanted to be going, so he had to be patient on him. He gave him a great ride.

“If you had a yard full of him you’d be flying and Joseph has done a great job with him. We’ll tip away in similar races and the bit of good ground is a help to him as well.”

Paddy Power and Betfair cut the winner to 25-1 from 33s for the Grand National.

Jack Kennedy’s mount was not disgraced in Grade Three company on her hurdling debut and made no mistake down in class.

“She is a nice mare, is a galloper and I’d say when she gets further she will be better. She is tough and it is a good performance,” said Elliott.

“The further she goes, the better she’ll be and we’ll take it step by step with her. There is a race in Haydock in two weeks’ time and there’s a race back here for her also.”

Henry de Bromhead’s 2021 Cheltenham Festival winner Telmesomethinggirl was odds-on for her chasing debut in the Richard Brennan Fencing Services Beginners Chase – but she could never get on terms with the Mullins-trained Glengouly (100-30) who made all for Paul Townend.

“It was Plan A to jump out and hope that he would jump well as he has jumped well at home. I think he can jump better than he did today, but he got a good start and kept it up,” said Mullins.

“I was a little apprehensive the ground was so dry, but maybe it was more advantageous to us than the opposition.

“At Christmas you’d be looking at the Grade One at Limerick, but I think we might look for an easier race.”

De Bromhead did get on the scoresheet with 20-1 chance Popova in the Killinan Maiden Hurdle.

All good to go at Cheltenham 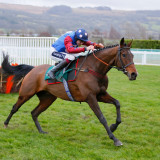 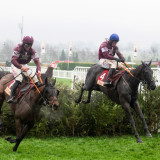 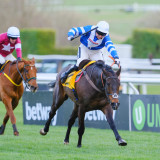